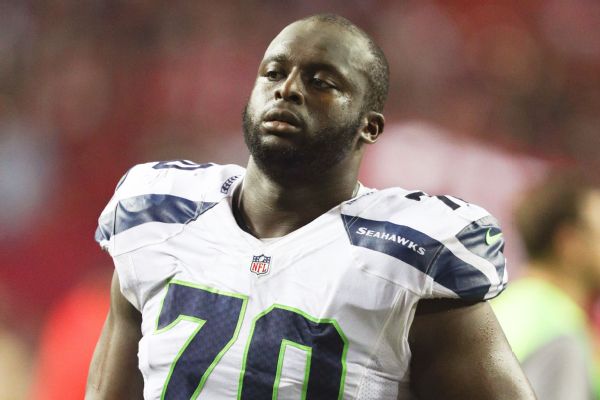 RENTON, Wash. -- The Seattle Seahawks are optimistic that starting left tackle Rees Odhiambo will be available for Sunday's game against the Los Angeles Rams after he spent time in the hospital last week with a chest injury.

Meanwhile, coach Pete Carroll said Friday that the team hasn't ruled out the possibility of rookie defensive lineman Malik McDowell playing this season. McDowell, the team's top draft pick, has been out since he was injured in a summer ATV accident.

The team has declined to disclose much about the nature or severity of McDowell's injuries, citing the wishes of McDowell's family. Carroll previously said a concussion was one of the injuries McDowell suffered in the accident. On Friday, Carroll called it a "really bad concussion" and said McDowell will be reassessed within the next few weeks.

"There's been some conversation, different camps about where he is and how he's doing," Carroll said. "So the checkups are really important and we'll just see. We have not ruled that thought out that he can come back."

Carroll gave no timetable for when McDowell may be able to return this season. He's on the non-football injury list and therefore is eligible to begin practicing at the start of Week 7.

Chosen in the second round out of Michigan State, McDowell was expected to be a key part of the Seahawks' defensive line rotation as a rookie, particularly as an interior pass-rusher on third down. But the team made a surprise announcement on the first day of training camp that he had been injured in a vehicular accident -- which was later revealed to have involved an ATV -- a few weeks earlier.

At the end of the preseason, the Seahawks acquired Sheldon Richardson in a trade with the Jets with an eye toward filling the role they had in mind for McDowell.

Odhiambo was injured in Seattle's win over the Indianapolis Colts when he took a hit to the chest on an interception return. He had trouble breathing while finishing the game, and the problem worsened after the game to the point that Odhiambo needed medical attention from paramedics, who took him out of the locker room on a stretcher. He spent Sunday night in the hospital, where he was diagnosed with a bruised sternum, according to the team.

"He had a good Wednesday and a good Friday," Carroll said. "We gave him a break on Thursday just to make sure we didn't overdo it. And he looks like he's ready to go."

"He went through quite a big game night and then he bounced back really well right after that, though," Carroll said. "He was upgraded on Wednesday because he felt that good and he went ahead and practiced and all that. We weren't sure of that. So from that point is when we started getting all the positive signals that he's OK and all that. So he recovered well. They took great care of him and kept him out of harm's way, and we're fortunate that everything worked out fine."

Cornerback Jeremy Lane (groin) and running back C.J. Prosise (ankle) are listed as doubtful for Sunday's game against the Rams. If Lane can't play, rookie Shaquill Griffin will start at right cornerback and Justin Coleman will take over in the slot, where Lane usually moves in passing situations. J.D. McKissiclikely will help handle third-down duties in Prosise's absence, while Thomas Rawls and Eddie Lacy will be the team's main early-down options.

Defensive end Quinton Jefferson, who was signed this week off the Rams' practice squad, won't play after breaking his hand in practice on Wednesday. Carroll said Jefferson likely will be out for about a month. The team previously ruled out starting defensive end Cliff Avril because of a neck injury that Carroll said could be a long-term issue.