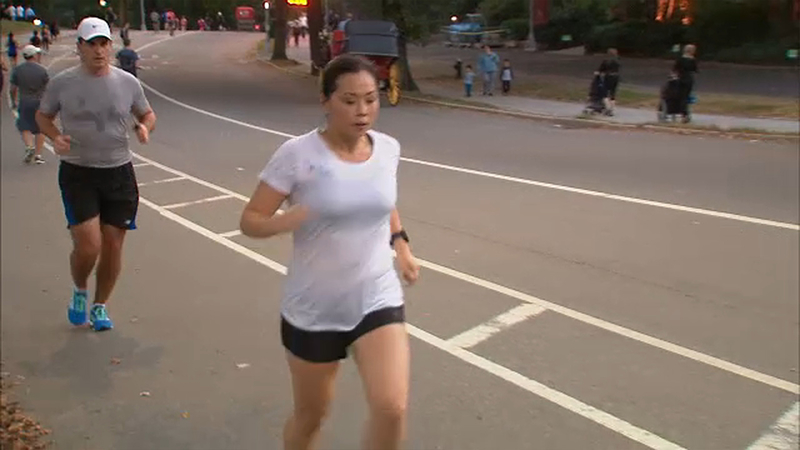 She tracks every step and paces each breathe.

But the Queens woman is not a runner.

In fact, she's never run a marathon before.

Yet the TCS New York City Marathon has been a part of her life for 20 years.

"I always had a spot to watch and it was the perfect spot," Choi says.

That perfect spot is her parents deli in Park Slope, where she had a front row seat since middle school.

Her first experience, Choi says "I was so scared to reach my hand out as a kid, to touch the runners, because I saw all the other runner kids and all their parents get their hands slapped and they were so excited about it."

So her mother physically pulled her hand into the runners lane, and with that first hand slap her love for the marathon was born.

"Oh my god it was so great. I was like oh my god is this what it feels like? And I got super excited. So I started chasing after the runners," says Choi.

And each year as runners passed their deli her parents would say things like, "Man it would be so cool to run this. I wonder what it must be like, they must be so tired."

But training for the marathon for them just wasn't an option.

Like most Korean immigrants Choi says "They worked almost 18 hours a day, every single day, seven days a week. They didn't ever close."

So this year Choi decided to do this for them.

When she told her father she says, "He like paused for a second and he was like WHAT! He like screamed really loudly into the phone and I remember I jumped."

And as you'd expect her mother is oozing with pride, but she is still a mom, and moms worry.

Speaking in Korean her mother says, "it's a long race what if she trips and falls," before bursting into laughter.

So this is a story about a first time marathoner, and sheer will and guts.

But it's also about community.

And how sometimes a race can be a common bond between neighbors.

Customers at her deli tell Heidi Choi, "You have the best mom. She's literally the sweetest."

They tell her mother, "Congratulations. You must be so proud."

But this story is also about family, and how the next generation can sometimes take giant steps forward.

"I want them to feel like they ran it too, with me, because they couldn't do it," Choi says.