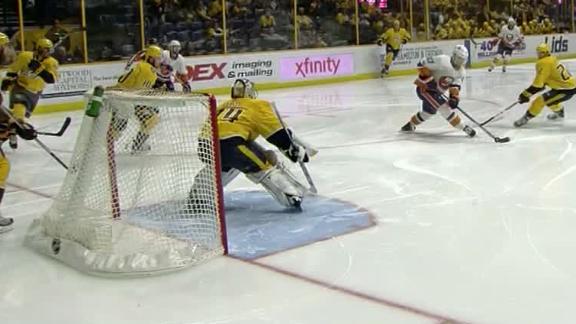 Where will John Tavares be playing next season?

Greg Wyshynski: I think John Tavares will be playing for another NHL team next season, one with a Stanley Cup in reach, some intrinsic "thing" that entices Tavares out of his comfort zone and, above all else, an arena.

Understand this: Tavares wants to be an Islander. He loves being an Islander. He's made it known, throughout his career, that returning this franchise to championship glory is important to him.

But at this point, it has to be weighing on Tavares to constantly worry about the direction of the New York Islanders: Not just on the ice, where he's been to the playoffs three times and out of the first round once in nine seasons; but also literally in what direction the franchise will be moving next. To a new arena at Belmont Park, after the Brooklyn debacle ends? To some vacant lot to be named later in Queens?

As Emily notes below, the success or failure of that bid is tied to whether Tavares is an Islander for the next eight years. Admittedly, I'm a little pessimistic about the Belmont Park solution. (And admittedly, some of this is because the New York area needs a new arena like it needs another dollar-pizza spot.)

So if he walks, where does he end up? Forget the Don Cherry "Good Ontario boy" fantasy of Tavares with the Toronto Maple Leafs, especially on a short-term deal. But what about a team that has one of his closest friends as its captain (Steven Stamkos), a burgeoning mega-star winger (Nikita Kucherov), a Norris-caliber defenseman (Victor Hedman) and Stanley Cup aspirations? One with $5 million in cap space that's one Tyler Johnson trade away? One that plays in Tampa, which is a pretty nice deal for an avid golfer like Tavares?

I want to be wrong here. I hope Tavares re-signs to play in a new building where the fans can, like, see the entire rink, unlike in the Islanders' current environs in Brooklyn. But I'm not comfortable saying he will when that fate seems tied to an arena deal that's months away from approval -- if it is approved.

Emily Kaplan:Tavares will be a New York Islander next season. For all the dysfunction that franchise endures -- particularly a miscast arena in Brooklyn and constant threats to play elsewhere -- here is something the Islanders can get right. However, this isn't a question about whether the Islanders want Tavares, their 27-year-old captain (who just so happens to be surging, with 10 points off two hat tricks in his past four games). Rather, why would Tavares want to stay with the Islanders? Security is a lure, and if the Islanders are going to lock Tavares in, they need to make some assurances about their future. That's hard when future plans are fragile. Larry Brooks of the New York Post details this quandary, explaining that the current front-runner for a new arena, the Belmont Park proposal, is "a complex, multi-stage process involving multiple bidders." That's going to take some time. It's very likely that Feb. 26 -- the NHL trade deadline -- will come and go without approval on the project. I'm hopeful the Islanders can get some clarity between then and July 1, and relay that to Tavares. One thing working in the Islanders' favor: They have the money, and they are able to offer Tavares a max eight-year deal, when he can only get seven years elsewhere. GM Garth Snow has said he thinks the world of Tavares; the center has hinted it is his preference to stay. Call me a sap or an optimist, but I like to think this is one Islanders saga that gets a happy ending.

Chris Peters: I'm with Emily in that I think the most likely scenario is Tavares is a New York Islander next season, but I wouldn't call it a lock. The arena issue is obviously a big one, but the other question is, what does Tavares see in terms of the long-term on-ice product? The Isles have skilled youngsters such as Anthony Beauvillier and Mathew Barzal on the everyday roster now, but the system isn't exactly loaded with blue-chip prospects coming up. Meanwhile, Johnny Boychuk and Nick Leddy are the only players locked up long-term who should be viewed as core pieces to a contending team.

I think Tavares is a different breed of player. He's not going to be chasing a paycheck alone, though he should command a massive salary no matter where he goes next season. I think he is going for fit and an opportunity to contend. He might very well see that in the Islanders, but other opportunities will be available to him that could give him pause.

While I wouldn't call this a prediction, per se, I think the team the Isles have to be most worried about is the Montreal Canadiens. Tavares would be the No. 1 center that franchise has desperately needed for years, and with some creativity, the Canadiens should have the available salary-cap space to accommodate the big ticket. I don't know that as an organization they're a ton further ahead of the Isles, but Carey Price, Shea Weber and Jonathan Drouin as other core players on the roster -- each locked up long-term -- adds enticement. Regardless, this is going to be an uncomfortable waiting game for Islanders fans.