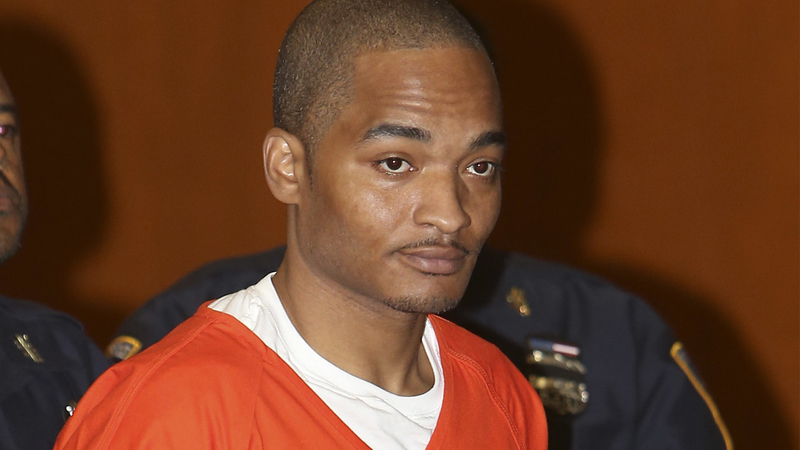 QUEENS VILLAGE, Queens (WABC) -- A Queens man has been found guilty on all counts in the death of a New York City police detective in 2015.

Demetrius Blackwell, 37, was convicted of first-degree murder and other charges in the death of Detective Brian Moore, who was shot in the head while on patrol with his partner.

Watch the raw video from inside the courtroom showing the verdict being read for Demetrius Blackwell in the murder of NYPD Detective Brian Moore.

Moore was just 25 years old, but he was already a decorated NYPD officer with more than 150 arrests. He was posthumously promoted to the rank of Detective.

"We're paid to do this job," Patrolmen's Benevolent Association President Patrick Lynch said after the verdict. "Our families are not. Their courage is overwhelming and gives us all the strength we need to do this difficult job."

In closing arguments following a three-week trial, prosecutors said Blackwell was more concerned about who won the Floyd Mayweather-Manny Pacquiao bout as Moore lay dying at a hospital.

Moore and Officer Erik Jansen were in street clothes in an unmarked car when they attempted to stop Blackwell, who was suspected of carrying a handgun.

"If I had a conversation with Blackwell, I'd like to have the same conversation," said Detective Moore's father, retired NYPD Sergeant Raymond Moore, outside the courtroom after the verdict. "I'd like to walk up to him, tell him, 'Yeah, I got something for you,' and put two bullets in his head...that's what I would like to do."

Jansen was also wounded, but he survived.

The defense argued that Blackwell has severe mental health issues and was not in control of his actions.

"Mr. Blackwell has seizures and psychosis mixtures that shows he was not responsible," attorney David Bart argued. "He acted badly, wrongly and stupidly, but it was not intent to kill."

Saunders countered, saying there was "no loss of self-control."

"Officer Brian Moore was killed because he was a police officer," Saunders said.

Blackwell faces a mandatory sentence of life in prison without parole.