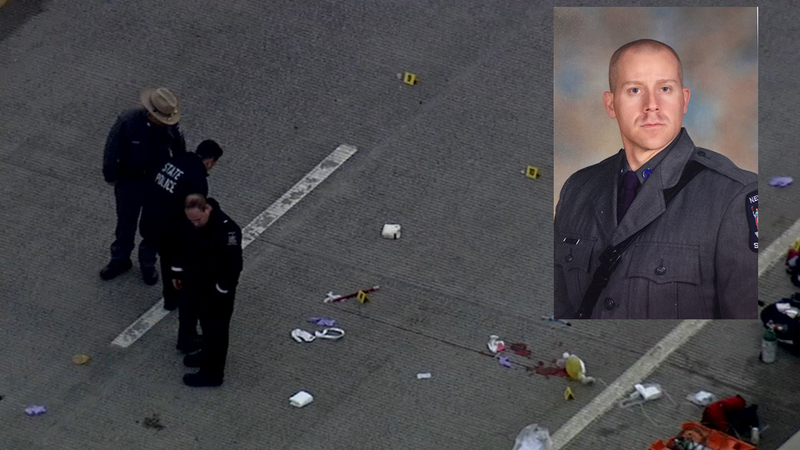 State trooper seriously injured after hit by car on LIE

BRENTWOOD, Long Island (WABC) -- A New York State trooper suffered serious injuries when he was struck by a vehicle while helping a motorist on an exit ramp from the Long Island Expressway, officials said.

The crash happened on the westbound exit ramp to the southbound Sagtikos Parkway in Suffolk County around 2:30 p.m.

Officials said Trooper Joseph Gallagher was setting up a flare for two disabled vehicles when he was struck. He suffered severe head injuries.

Gallagher, 35, was taken to Southside Hospital in Bay Shore where officials say he underwent surgery. He's listed in serious condition.

Officials are crediting the fast response of paramedics, who arrived at the scene moments after the crash.

"We were extremely fortunate that there were two paramedics, MCAT paramedics, that rolled up on the scene within one minute and rendered Immediate aid and we believe saved our troopers life," Superintendent George Beach with the New York State Police said.

Gallagher has been on the force since 2014 and is assigned to Troop L out of Brentwood.

The driver that struck the trooper did stop and is cooperating with investigators, authorities said. No charges have been filed.

The investigation is ongoing. State Police ask any witnesses to the crash to contact SP Farmingdale at (631) 756-3300.