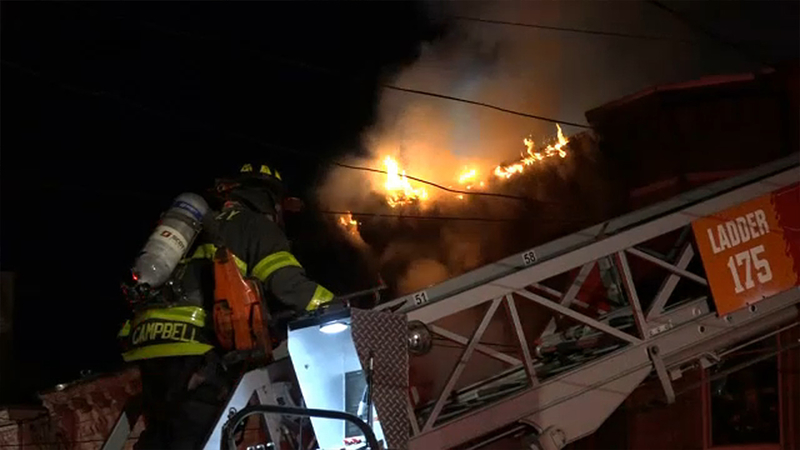 CYPRESS HILLS, Brooklyn -- A two-alarm fire in Brooklyn early Thursday forced more than two dozen out of their homes for the holidays.

The fire broke out at a home on Ashford Street in Cypress Hills just after 1 a .m. and spread to two other adjacent homes.

Many people were sleeping at the time, but the sound of fire alarms helped to get them out.

"I was asleep in the room, and when I looked up, I saw fire in the widow," victim Edward Bryant said. "I looked for an extinguisher to extinguish the fire. I couldn't locate one."

Bryant said the flames were moving quickly, and he didn't have much time.

"I immediately had to get out with what I had on," he said. "In my pajamas with no shoes."

William and his wife had lived in their home for 37 years. After the fire, they're not sure there is anything they can salvage.

"I had just laid down and the lights went out, and I looked out the window and saw sparks," he said. "It don't make sense to get upset."

Two people suffered minor injuries, and the damage left behind has left 26 people displaced during the holiday season.

The American Red Cross is responding to the nearly two dozen residents left homeless. Many lost everything, but they're just thankful to be alive.

Investigators were searching for the cause of the fire.