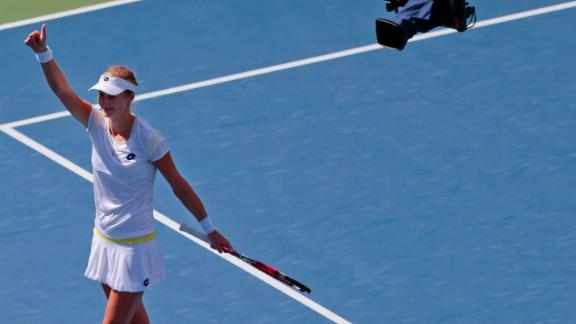 NEW YORK -- Ekaterina Makarova describes herself as a person who prefers "to stay in the shade."

At this year's U.S. Open, she finally believes she deserves to play under the brightest lights.

"Before maybe I didn't believe that much that I can come through," she said. "Today definitely was a different feeling."

Azarenka acknowledged she suffered from food poisoning the day before but didn't want to talk about how it might have affected her. Unusually subdued for most of the match, she smashed her racket after one of her 27 unforced errors gave Makarova a break and a 4-2 lead in the second set.

"I'm not going to make any excuses," she said. "I did the best I could today. I want to give full credit to my opponent. She deserves to win. She played much better than me today."

The players were 16th and 17th in the seedings but came in with very different resumes. Azarenka is a two-time Australian Open champion who lost to Serena Williams in the last two U.S. Open finals.

Yet in some ways, falling short of the semifinals would have been more distressing for Makarova, who lost to Lucie Safarova in straight sets in the Wimbledon quarters this summer.

"I really believed that at (this) U.S. Open I can do my best result," Makarova said. "I felt that I'm ready."

Azarenka arrived at Flushing Meadows having played just eight matches since the Australian Open because of foot and knee injuries, her ranking plunging. She got five in here, a huge help to rediscovering her rhythm.

"I can take positive from this tournament," Azarenka said. "Two months ago, I didn't even think that I was going to be able to play."

But she had often looked shaky against qualifier Aleksandra Krunic in the fourth round before eking out a three-set victory, and Makarova took full advantage of Azarenka's mistakes.

Makarova was coming off a straight-set upset of Wimbledon runner-up Eugenie Bouchard. Against Azarenka, the lefty's deep groundstrokes kept on the pressure.

Down an early break in the first set, Makarova immediately broke back and looked sharp the rest of the way. She has yet to drop a set at Flushing Meadows.

Her semifinal opponent could be Williams. The two-time defending champ faced 11th-seeded Flavia Pennetta to open the night session at Arthur Ashe Stadium.

Novak Djokovic and Andy Murray take the court after that for a rematch of the 2012 U.S. Open final. Stan Wawrinka was playing Kei Nishikori in the other men's quarterfinal Wednesday afternoon.

Now that Makarova is in her first major semifinal, maybe everyone will learn to pronounce her name. It's Ma-KA-ro-va, not MA-ka-ro-va.

Still, she's perfectly amused that tournaments have started playing "The Macarena" over the stadium loudspeakers after she clinches a victory.

She does indeed know how to do the dance. Unlike Azarenka, who sang in her on-court interview after her last match, Makarova is in no hurry to show off her moves.

But asked whether holding up a trophy at the end of the U.S. Open would be cause to break them out, she smiled and said: "Yes."

Makarova Reaches Semifinals
Mary Joe Fernandez and Brad Gilbert break down Ekaterina Makarova's performance in her win over Victoria Azarenka at the US Open.

Makarova Tops Azarenka, Advances To Semis
Ekaterina Makarova talks about her win against Victoria Azarenka to advance to the semifinals at the US Open.