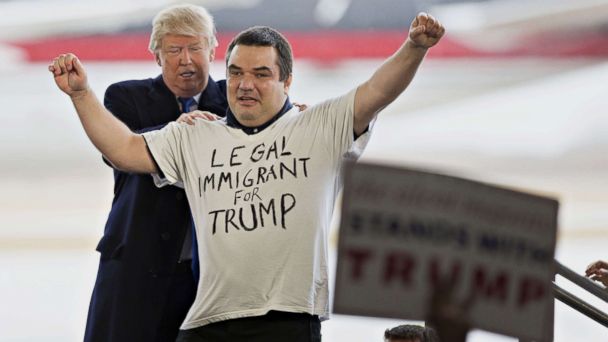 The current controversy over President Donald Trump's racially tinged comments in a discussion about immigration from Haiti and African nations marks the latest in a series of comments made by the president that critics have charged are racist and inflammatory.

Since launching his bid for the presidency in 2015, Trump has ensnared himself in controversy on several occasions over comments he's made on everything from relations with Mexico to questioning the citizenship of America's first black president.

Here is a look at five instances where Trump has been accused of making disparaging comments about immigrants or people of color.

Trump was a vocal supporter of the birther movement, which questioned the veracity of former President Barack Obama's birth certificate and suggested that he was not born in the United States, which would have made him ineligible to be president.

Trump stoked that debate for years, at one point reportedly sending a private investigator to Obama's birth state of Hawaii to search into the issue further.

Many viewed it as a racially charged attack that critics said was an attempt to undermine the first African-American president of the United States.

Trump only denounced his earlier claims in September 2016, well into the 2016 presidential campaign, acknowledging that Obama was born in the United States.

Trump was an active Twitter user even two years before his presidential candidacy when he asserted a connection between crime and racial and ethnic groups, without evidence backing the claim.

"Sadly, the overwhelming amount of violent crime in our major cities is committed by blacks and hispanics-a tough subject-must be discussed," he wrote in the tweet.

In the years that followed, Trump has shared other tweets about the connections between race and crime, including a notable tweet he retweeted in November 2015 that included a picture of false statistics about the percentage of "blacks killed by blacks" and "whites killed by blacks." The image has since been removed from Twitter by the original person who posted it.

3. Kicking off his campaign

Trump made it clear that immigration reform would be a major goal of his presidential campaign by mentioning it in his announcement speech in June 2015.

Rather than specifically talking policy issues, however, he made comments about stopping Mexican people from entering the country that were widely perceived as racist.

Trump raised eyebrows and prompted ire even from other Republicans in June 2016 when he said a federal judge who was presiding over a Trump University lawsuit had an "inherent conflict of interest" because the judge's family was "of Mexican heritage."

The judge in question was U.S. District Judge Gonzalo Curial, who was born in Indiana.

House Speaker Paul Ryan was one of the leading Republicans who came out against the remarks, calling them the "textbook definition of a racist comment," but he stood by his endorsement of Trump.

The New York Times reported in December that Trump made disparaging comments about immigrants from certain countries during a June meeting in the Oval Office. Trump said all of the immigrants who came to the United States from Haiti "all have AIDS," and those from Nigeria would never "go back to their huts" after seeing the United States, according to the Times.