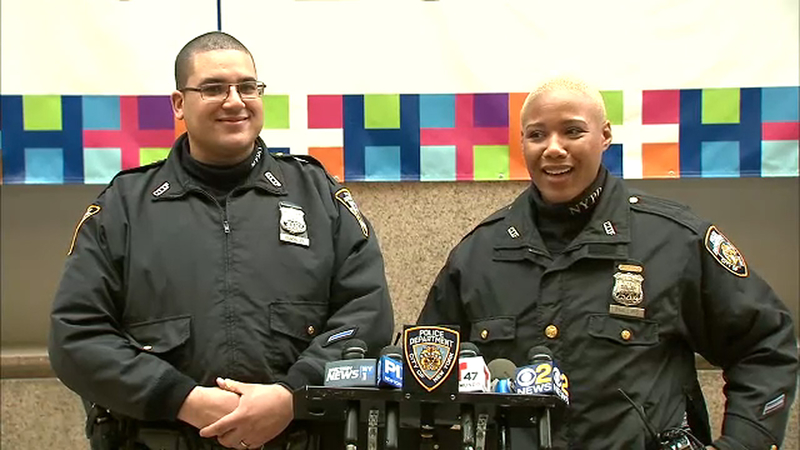 Authorities say officers Tiffany Phillips and Carlos Guadalupe, both 12-year veterans, delivered the baby boy. The officers were flagged down by a man who was driving at 41st Street and 10th Avenue.

Cell phone video captured the officers in action, as Officer Phillips delivered the baby inside the car.

"They are very grateful for us being there at that spot, at that time," said Officer Phillips.

The officers had just started their day and were enforcing 'do not block the box' when a man jumped out of the car and said his wife was going into labor.

"He was very frantic and scared," said Officer Phillips.

The couple from Jersey City was rushing to Lenox Hill Hospital, but the baby wasn't waiting.

Officer Phillips called for an ambulance and leaned into the car. But by then, the baby was crowning.

Officer Guadalupe ran into a hotel to get towels. When he came back Officer Phillips was holding the little boy, who wasn't breathing.

"I began to pat his back and to massage him," she said. "Once I did that I heard him begin to cry, his eyes were blinking and he was breathing. That was a great sound!"

Mother and newborn were taken to Bellevue Hospital and are said to be doing fine.

"I got to thank my partner, A plus plus," said Officer Guadalupe. "She held it down and she did her job. She held her composure. She was fantastic."