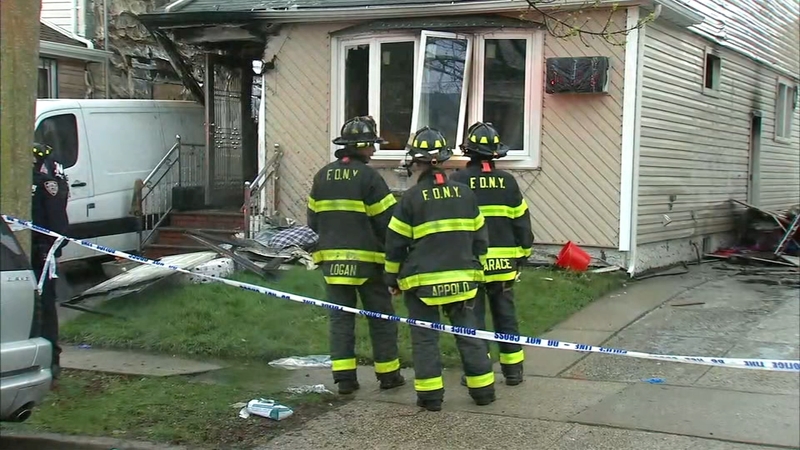 QUEENS VILLAGE, Queens (WABC) -- A family in Queens is trying to cope with a devastating loss after three members were killed in a fast-moving house fire. The fire also left several other relatives hurt as well.

The fire broke out just before midnight Saturday at a two-story home on 211th Street in Queens Village.

The three-alarm blaze engulfed the first and second floors and caused some damage to adjoining properties. It took firefighters about two hours to bring it under control.

A mother of two on the second floor was able to escape the fire with her young kids, but she ran back inside to save other family members and never made it back out.

"She came out from the house and she went back in," said the victim's brother, Param Singh.

The brother of Harleen Kaur, 32, says his sister knew that there were others trapped inside. The Queens Village woman perished while desperately trying to rescue her loved ones.

Singh's uncle on the second floor escaped badly burned. His grandparents, Ragvir Kaur-Kainth, 82, and Pyara Kainth, 87, did not make it out alive.

"My cousin's brother jumped down from third story. He broke his leg. I still can't believe this happened," says Singh.

Ranjit Kuar, Harleen's close friend was in the basement when she smelled smoke. At first she thought it was just someone cooking, but then she saw something she will never forget.

"When I came outside, I saw everyone was coming out from the first floor door and their faces were black," she said.
Officials say an eight-year-old girl was critically injured. Seven others are in serious condition.

The cause of the fire is under investigation, but it is not considered suspicious.