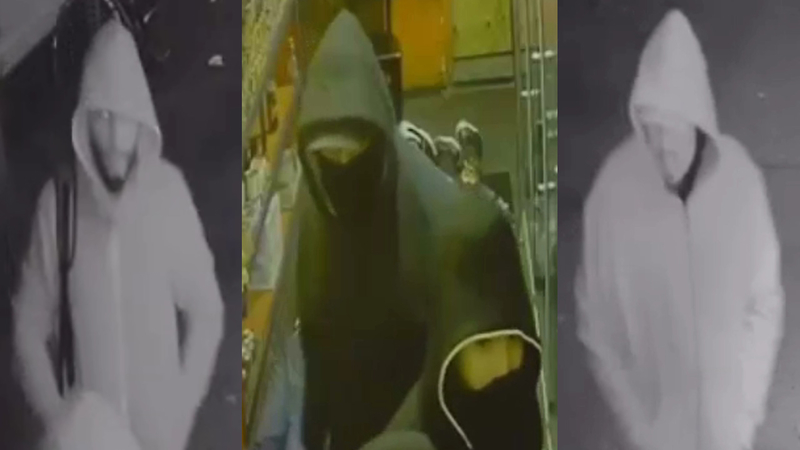 NORWOOD, Bronx (WABC) -- Police are searching for three men behind an armed robbery at a Bronx deli, and they're hoping surveillance photos and video will lead to arrests.

The robbery happened around 4:30 a.m. Sunday at One Legend Deli on East Gun Hill Road in the Norwood section.

"I was sleeping," said Chris Lopez, who co-owns the deli with his brother Nick. "I received a call at 5 in the morning. My brother tell me that the store had been robbed at gunpoint."

Authorities say one of the three suspects displayed a handgun and demanded money from the clerk behind the counter.

"Three guys rushed in here with a gun out, pointed it at the employee who was sweeping, put it to his head," Lopez said. "After that, he just pointed it higher towards my brother's chest. So my brother backed up, put his hands up."

A second suspect tied up two other employees in the back of the store, while the third went behind the counter and removed $1,100 from the cash register.

Surveillance video of the robbery and the suspects:
EMBED More News Videos

"They just told them, 'Stop moving, because we will shoot anyone who moves too much,'" Lopez said. "The gun was pointed right at his chest with a red dot on it. My brother, if he would've really moved, they would've definitely shot him."

Lopez said his employees and his brother were not physically injured, but they are disappointed at the situation.

"It's really sad, because he has his own kids, his own responsibilities," Lopez said. "He's overnight to help the community. But they turned around against us. So he's really upset."

Police said they recovered the suspects' fingerprints from inside the deli.