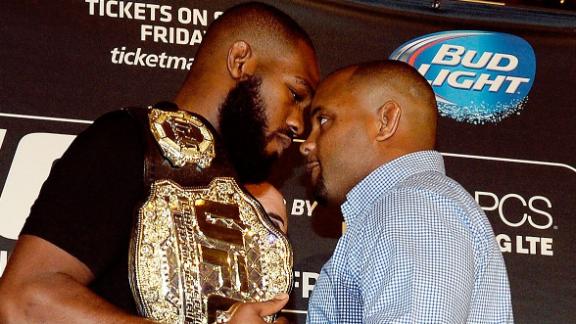 LAS VEGAS -- The Nevada State Athletic Commission voted unanimously to fine UFC light heavyweight champion Jon Jones and Daniel Cormier for their participation in a brawl on Aug. 4 inside the lobby of the MGM Grand Hotel and Casino.

The incident occurred during a prefight news conference to promote a title bout between the two, which was originally scheduled to take place on Sept. 27 but was later postponed to Jan. 3 due to a leg injury suffered by Jones.

The two clashed heads as they stepped forward for a traditional staredown photo opportunity. At that time, Cormier put his hands in the area of Jones' neck and shoved him backward. Jones then stepped forward and threw several punches at Cormier, before the two then toppled off the stage. They were separated moments later.

Both athletes apologized for their actions during an NSAC hearing on Tuesday. Jones (20-1) said the brawl has cost him a sponsorship deal with Nike, which his attorney Ofir Ventura claimed was worth "over six figures."

"I made us all look bad as a champion," Jones said. "It was a terrible thing in a very heated moment. I've never done anything to discourage the sport. I make a very conscious effort to be a great example. It's embarrassing for me. I realize it comes with consequences and, as a man, I've come to accept them."

The two fighters also denied accusations that the dust-up was contrived. Cormier said he introduced his fiancee to Jones the morning of the altercation, while Jones said he'd never been in a staredown situation like that before.

"I've got in many faceoffs with a lot of great fighters," Jones said. "I have gone forehead to forehead before. I've never had my throat grabbed like that.

"I had to show that I am a champion. I'm a winner and I'm the aggressor. That's my attitude."

Jones' attorney argued the NSAC should not fine based on percentage of purses, as Jones makes substantially more than Cormier as the reigning UFC champion. Cormier told the NSAC he is scheduled to make a base pay of $90,000 for the Jan. 3 title fight and a possible $90,000 win bonus. The numbers do not include any additional revenue Cormier would receive.

Cormier argued his actions were taken in self-defense, but said he regretted the incident and said he would handle it differently in retrospect. Both fighters swore to never participate in any similar action.

Jones declined interviews as he left the building. Shortly after the hearing, he tweeted:

40 hours of community service in Vegas with a fight coming up is the only thing that really concerns me.

- Jon Bones Jones (@JonnyBones) September 23, 2014Jones (20-1) is currently recovering from a knee and ankle injury he suffered in training. The bout between he and Cormier (15-0) is scheduled to headline a UFC 182 pay-per-view event on Jan. 3.

Jones, Cormier Fined For Prefight Brawl
Brett Okamoto discusses why Jon Jones and Daniel Cormier were fined differently by the Nevada State Athletic Commission for a brawl on August 4 in the lobby of the MGM Grand Hotel and Casino.