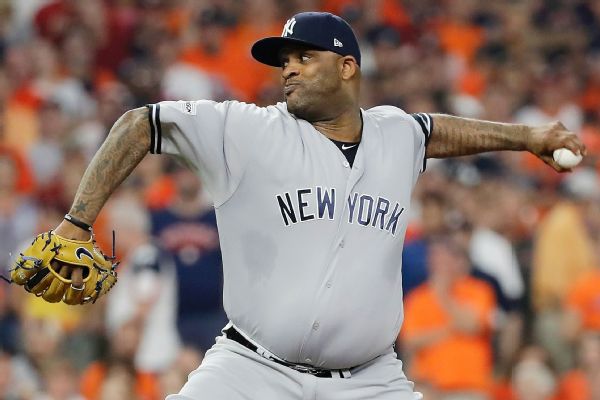 ESPN
By Coley Harvey
NEW YORK -- The Yankees placed starting pitcher CC Sabathia on the 10-day disabled list Saturday, one day after he left a game against the Baltimore Orioles early due to a hip injury.

Sabathia will be joined on the 10-day DL by third baseman Brandon Drury, who also came out of the 14-inning marathon early because of severe migraines and blurred vision.It's unclear just how long Drury could be out. He'll be seeing a doctor Monday as the Yankees begin addressing an issue that has bugged him for some time.

"Man, it's just blurry," Drury said Saturday. "I can see the ball enough to kind of hit it and kind of catch it, but it's not where it needs to be. It's something, I've just got to figure out what's going on."

Manager Aaron Boone hinted after the 7-3 loss that roster moves could come Saturday as Sabathia would be re-evaluated.

After Friday's game, Sabathia said he felt "fine" and would make his next start at Boston.

"At that this point at the season, it's just being cautious," Boone said Saturday. "As he goes through throwing [Saturday] and his routine, hopefully it's something that will just be a start. It was just a cautious move."

In addition to the DL moves, the Yankees optioned reliever Jonathan Holder to Triple-A Scranton/Wilkes-Barre after he allowed a 14th-inning grand slam Friday. Holder had a 20.25 ERA in three relief appearances this season.

To fill those three roster spots, the Yankees recalled pitchers Luis Cessa and Domingo German from Triple-A, and signed infielder/outfielder Jace Peterson from Scranton/Wilkes-Barre to a major league contract.

Sabathia, 37, allowed four hits and three runs -- all on solo home runs -- on only 58 pitches. He didn't show signs of trouble with the hip while he was on the field, but he said he started feeling the soreness as he finished his warm-up pitches in the third inning.

"It was sore, and I've never felt that spot before -- ever, throwing a baseball -- so it was a little nerve-wracking," Sabathia said about coming out of the game following the fourth inning.

Other than an ankle injury that sidelined him briefly, Sabathia was mostly healthy during spring training. Last season, he spent time on the disabled list with a strained left hamstring and right knee inflammation.

Drury was replaced in the sixth inning of Friday's game.

Boone said Saturday that he he just learned of Drury's blurred vision, but he acknowledged that the infielder told him Saturday morning that it had been plaguing him for years.

"He's just kind of tried to battle through it and not want to say anything; that's the kind of gamer, grinder that he is," Boone said. "But he's realizing that we need to try as best we can get to the bottom [of this]."

Drury agreed the time away would be a good thing.

"I don't want to be out there if I'm playing at 50 percent if it's something that we can fix and get back out there and get healthy," Drury said.

Wade was sick last week in Toronto, too, but nothing to the extreme of what he felt around the third inning Friday. At points during Friday's game, he said he had "the shakes," had a fever, was dry heaving and, when it came to his final at-bat of the night, didn't have any energy.

"I felt I was hurting the team more than helping," Wade said, requesting reporters who spoke with him stand about six feet away as he didn't want to get anyone sick.

Wade was feeling better Saturday morning after a regimen of fluids and an IV, but he will not play Saturday and will rest.

Catcher Gary Sanchez also was removed in the 14th inning after clutching his right calf in between pitches. He and Boone said he was cramping. By the point when he came out, Sanchez had caught more than 250 pitches.
Report a correction or typo
Related topics:
sportsespnbrandon drurymlbmigrainenew york yankeesjonathan holderjace petersontyler wadecc sabathiahipfluaaron booneyanksgary sanchezcramps
Copyright © 2020 ESPN Internet Ventures. All rights reserved.
More Videos
From CNN Newsource affiliates
TOP STORIES