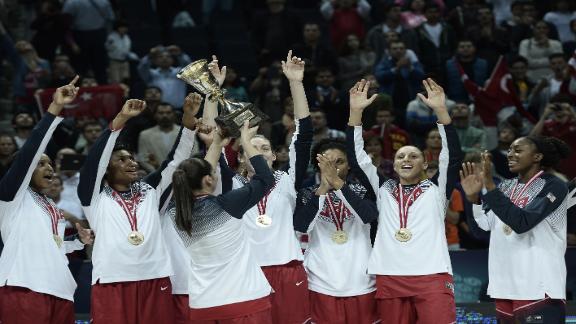 Bird became the most-decorated player in world championship history when the Americans won a second straight gold with a 77-64 victory over Spain on Sunday night.

Bird has won three gold medals and a bronze.

"It was a great win for us," Bird said. "We had one goal the entire time this team's been together and that's win a gold medal. A lot of people see a lot of talent and think it's going to be easy and it's not. Whenever you can win a gold medal and it's a tough journey, everyone's happy. I'm definitely proud of this team."

While Bird was quick to deflect what winning a fourth medal meant to her, coach Geno Auriemma was quick to heap praise on his point guard.

"She's very indicative of what USA Basketball is. She's loyal, a great leader, everyone respects her," Auriemma said. "She's been the youngest player on the team and now's the oldest player on the team. She's seen it all and done it all. I think when you talk about USA Basketball in the future on the women's side. There have been a lot of great names and her name will be mentioned very early in the names of players who play for USA."

Lindsay Whalen added 12 points for the United States (6-0), which hasn't lost in a gold medal game in the world championship since 1983, when it was beaten by the Soviet Union 84-82. Except for a hiccup in 2006 when the Americans lost to Russia in the semifinals, they have won every Olympic and world championship game since 1996. If not for that upset in Brazil, the U.S. would have five straight world titles.

The Americans quickly turned it into a laugher, jumping out to a 13-point lead in the first 4 1/4 minutes. Spain (5-1) could only get within seven the rest of the way.

Moore was the key in that early burst, scoring 11 points during the opening 18-5 run. Her 3-pointers barely moved the net as the Americans blitzed Spain, which was making its first appearance in the championship game.

"It's always a focus, we want to punch first," Moore said. "I put pressure on myself and the starting five, we put pressure on ourselves to get a good start, set the tone for the game."

Behind strong offensive rebounding, the Spaniards rallied to within 24-17, but then Whalen took over. She had nine points during a 13-0 run by the Americans spanning the end of the first and start of the second quarter to make it a 20-point game. Whalen ended the first quarter with a spectacular drive that ended with a floater in the lane right before the buzzer.

During the burst, Diana Taurasi threw a pinpoint pass to a streaking Seimone Augustus for another lay-in and the U.S. was off and running.

"We knew that we had to come in a provide a spark and I had an aggressive mentality," Whalen said.

"It's sweet to have a silver medal around your neck as we are one step closer to a gold," said Sancho Lyttle, who led Spain with 16 points. "But it also hurts because we know we were almost there."

While Taurasi only scored six points, she had eight assists. More importantly Taurasi was part of a stellar defensive effort by the U.S. on Spain's star Alba Torrens. She scored 28 points in Spain's semifinal win over Turkey but was held scoreless for the first 26 minutes of the game.

She finally hit a 3-pointer with 4:11 left in the third quarter, but that only made it a 21-point game. She finished with 10 points.

"I knew the other day I was going to have that assignment and we have enough scorers on this team that focusing on defense was key."