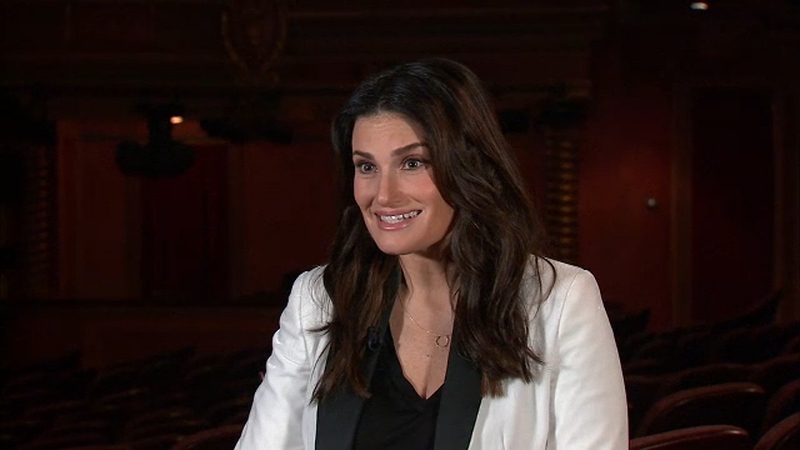 NEW YORK (WABC) -- She was the voice behind 'Let It Go' in the movie 'Frozen,' and the actress under the green makeup in the musical 'Wicked,' but one of Idina Menzel's most important roles takes her away from all that and sends the famous actress back to summer camp. Menzel said she found a refuge there as a girl and wanted others to have the same opportunity.

That's how she came to be front and center at a fundraiser earlier this week for her charity telling the crowd, "I love you all for being here." The Broadway star went looking for 'A Broader Way' so she started a foundation by that name which runs a summer camp in the Berkshires for girls from New York City. "I get more out of it probably than they get out of it," she told me at the start of rehearsals for a new play adding she's, "gotten humility, and hopefully some more compassion. I've learned about other people's stories: empathy - where people are coming from."

Over the past eight years, the program has grown from a few dozen campers to several hundred. Menzel's dream of a performing arts camp began in childhood and reached fruition after she found her own voice, but "as big a voice as I have: singing voice, my voice inside is shy or introverted, so if i as a woman am having these inhibitions, I had to get out there and help girls."

To help them find "A Broader Way" Idina has recruited some of her most talented pals to stage a show rooted in the experience of the campers, "we really try to encourage the girls to come up with original material and use from their own lives."

And, camp continues with programs throughout the year with one camper saying, "there's so many teenage girls in the area of New York that are just so lost, and they need guidance, and they need help in finding themselves. It seems Camp Broader Way is that place to help you pick you back up off your feet even though you've been through so many things."

Menzel is moving forward and giving back. Meanwhile, she is back on-stage starting Thursday evening in a play called "Skintight." She doesn't sing in this one, which is being staged by the Roundabout' Theater Company Off-Broadway. It's described as a "scorching examination of beauty, youth, and sex".