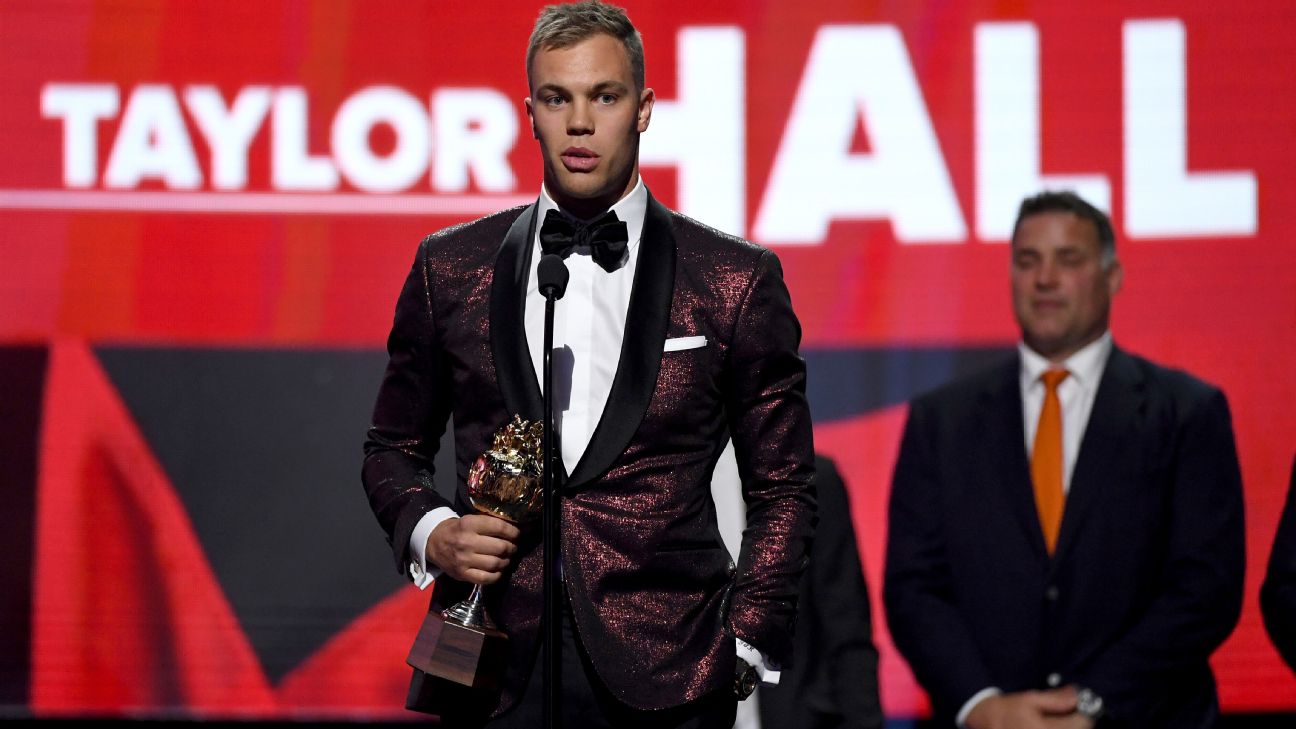 ESPN
By Greg Wyshynski
LAS VEGAS -- Taylor Hall of the New Jersey Devilsedged Nathan MacKinnon of the Colorado Avalanche for the Hart Trophy on Wednesday night, winning the NHL MVP race by fewer than 100 points in the voting.

"I saw Nathan briefly before the awards tonight. We were joking that we're now rivals," Hall said. "The voting was so close that you could make an argument for all three candidates. You could have had all three of us up there and it would have been totally valid. It's an honor to win out of those three guys and to represent the Devils as their first MVP."

All awards are voted on by the Professional Hockey Writers Association, unless otherwise noted.

Last year at the NHL Awards, the Vegas Golden Knights were constructed via the expansion draft. This year, their unprecedented run to the Stanley Cup Final was honored with four awards.

The architects of that run were feted:

Gerard Gallant won the Jack Adams Award for coach of the year, leading the Golden Knights to 109 points and the Pacific Division championship. The award is voted on by the NHL Broadcasters Association.

"I hate to say this, but congratulations to the Washington Capitals. They beat a real good team in the Final," Gallant said.

George McPhee won the NHL general manager of the year award, which is voted on by a 41-member panel that includes all 31 GMs, five NHL executives and five media members at the end of the second round of the Stanley Cup playoffs.

And Vegas defensemanDeryk Engellandwon the Mark Messier Leadership Award, which is presented "to the player who exemplifies great leadership qualities to his team, on and off the ice, during the regular season and who plays a leading role in his community growing the game of hockey." Messier selects the winner himself.

The rest of the night featured some big names taking home hardware.

Connor McDavid of the Edmonton Oilers won the Ted Lindsay Award for outstanding player, as voted on by the NHL Players' Association. He is the third active player to win the award in consecutive years, joining Crosby and Ovechkin. McDavid also is the second player to win the award without being in the top three of the Hart Trophy voting, after having won the Hart last season.

Victor Hedman of the Tampa Bay Lightning captured the Norris Trophy as the NHL's top defenseman, with 63 points in 77 games, skating 25:51 per game. He opened his speech with an acknowledgement of the Humboldt Broncos players and Marjory Stoneman Douglas High School students who were in attendance.

Hedman won by a slim margin over Drew Doughty of the Kings, with 94 first-place votes to 52 for Doughty. P.K. Subban of the Nashville Predators was third.

The Calder Trophy for rookie of the year was far from close. Mathew Barzal of the New York Islanders received 160 of a possible 164 first-place votes.

The 21-year-old Barzal became an immediate star while scoring 85 points in 82 games for the Islanders in his first full NHL season. The 16th overall pick in the 2015 draft scored 20 points more than any other rookie, racking up 22 goals and 63 assists while centering the Islanders' second line and providing a formidable one-two punch behind starJohn Tavares.

Barzal is the fifth Islanders player to win rookie of the year.

"Even to be mentioned in the same breath as Denis Potvin, Mike Bossy and Bryan Trottier is an honor," Barzal said. Bryan Berard was the other Isles rookie of the year.

Nashville'sPekka Rinnewon the Vezina Trophy for top goaltender with 22 first-place votes from the NHL's general managers. Connor Hellebuyck of the Winnipeg Jets was second.

In one of the night's most emotional moments, New Jersey'sBrian Boylewon the Masterton Trophy, awarded annually to the NHL player who "best exemplifies the qualities of perseverance, sportsmanship and dedication to hockey."

Boyle overcame a diagnosis of chronic myeloid leukemia to return to the Devils, representing them at the NHL All-Star Game. He mentioned his family's support in his fight, as well as the family's continuing concern over 3-year-old son Declan, who is undergoing treatments for brain arteriovenous malformation.

Henrikand Daniel Sedin captured the King Clancy Trophy for their humanitarian work. TheVancouver Canucksstars announced their retirement at the end of the season.