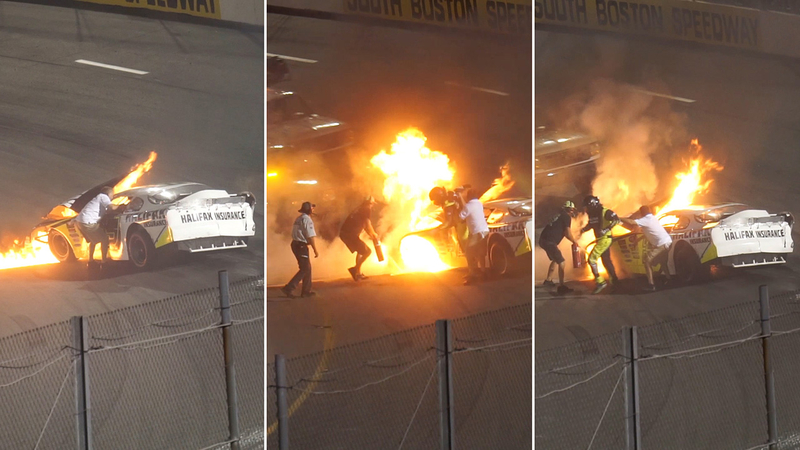 A dad was there in the nick of time to rescue his son from a fiery crash during a car race in South Boston, Virginia, over Father's Day weekend.

Mike Jones found himself competing for the lead at South Boston Speedway on June 16. Jones was battling with Matt Bowling when their cars made contact, sending both racers spinning into the infield wall, according to WSET.

After crashing into the wall, Jones' car ignited on the track. His father, Dean, who also works as his crew chief, immediately ran onto the track to pull Mike out of the burning car.

They walked away from the crash and Dean was able to press the fire suppression system to help extinguish the blaze.

According to ESPN, Dean was placed on probation by NASCAR for violating the policy that anyone, aside from safety personnel, is allowed to step on the racing surface during an event. He was not fined or suspended for the incident.
Report a correction or typo
Related topics:
sportscar crashrescuefirefamilyrace car
Copyright © 2021 WABC-TV. All Rights Reserved.
TOP STORIES
Attorney for Brian Laundrie says his whereabouts are unknown
Laundrie's sister speaks about Gabby Petito; Family speaks with police
'Positivity is hard': Gabby Petito's dad speaks about missing daughter
Police: Gabby Petito case not linked to slaying of two women in Utah
FDA panel backs COVID-19 boosters only for elderly, high-risk
Why isn't Laundrie talking? Legal Analyst Dan Abrams explains
Gabby Petito disappearance timeline: What we know so far
Show More
Arrest made after man kicked woman down NYC subway escalator
Dead whale set to wash ashore on Staten Island
Fight brewing over school's decision to hold classes without permits
Robert Durst found guilty in murder of Susan Berman
Video shows hostess assaulted over NYC vax requirement
More TOP STORIES News