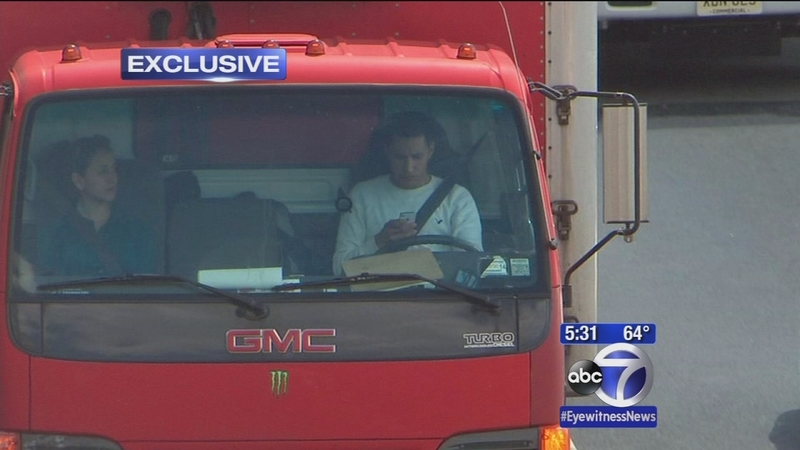 NEW YORK (WABC) -- Truck drivers on some of New York's busiest highways are texting or talking on their cell phones at an alarming rate.

It seems epidemic, Truckers on major New York highways texting or talking on the phone.

On the BQE, one trucker appears more focused on texting than driving. On the Major Deegan, a truck driver, along with his co-workers, is looking down, texting, eyes focused on his phone, not the road. Another big rig trucker on the LIE obviously distracted as he dials up someone to talk to on as he rolls along the busy highway. And one of the worst cases we observed, a driver engaged in duel distraction as he talks on two phones, carrying on two conversations. Slowing down the video, clearly shows the trucker's dangerous double phone technique.

On any highway where we set up our camera, we easily caught truckers dialing, texting and talking on their phones. Illegal for sure and potentially deadly.

"Dad was in his lane and coming to a stop . The truck just came up and hit him from behind and pushed him into another truck," said Bryan Weed.

A year ago, George and Kathy Weed from upstate New York were killed when a driver who police say was texting slammed his tractor-trailer into the back of the Weed's car on a Pennsylvania highway. The Weed's son and daughter say until the penalties for cell phone use by truck drivers and the companies they drive for are significantly increased, many more families will suffer unbearable loss:

"We're an extremely close-knit family. And this utterly destroyed us. I mean devastating beyond words," said Tricia Weed.

In New York, if this trucker on the Cross Bronx got stopped for talking on his cell phone, he'd be fined $150 and given 5 points on his license. Are stricter penalties needed to stop this kind of wide-spread distracted driving?

It's a question we put to NTSB board member Robert Sumwalt after he looked at our investigation.

Hoffer: "Do you think the consequences are strict enough for truckers?"

Sumwalt: "Well is it really changing behavior and from your video that indicates a lot of people driving commercial vehicles that are still using personal electronic devices and that would indicate the enforcement side of it is not strong enough."

The Department of Transportation says last year nearly 16,000 truckers were ticketed for using their cell phones, but only 4 of those were suspended and taken out of service.

If you have a tip about this or any other issue you'd like investigated, please give our tipline a call at 877-TIP-NEWS. You may also e-mail us at the.investigators@abc.com.