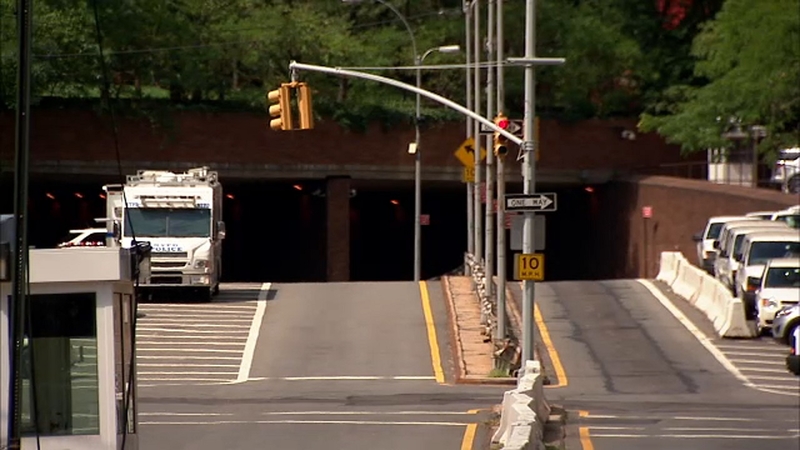 CHINATOWN, Manhattan (WABC) -- For almost 17 years, the road that runs under police headquarters has been shut down to traffic over terrorism concerns, but it has angered many in Chinatown. Community leaders have fought for years to get it reopened. On Thursday, the city finally reopened it, but not to cars.

Park Row is what all the controversy comes down to - a major artery linking Lower Manhattan to Chinatown.

Seven streets intersect, and Chinatown community leaders say when Park Row was shut down, it choked their neighborhood.

Park Row was closed after September 11th to security concerns - sitting above it is NYPD Headquarters. Community leaders have been fighting to get it reopened to vehicular traffic - they did not get that on Friday, but say it is all a start.

Just over a half mile now, it connects the rest of Lower Manhattan to Chinatown.

Chinatown's economy was crippled in the aftermath of 9/11 - some say in part because their lifeline to tourism was closed. Eventually MTA bus routes were restored.

Elected officials say while a bike path and pedestrian walkway isn't enough, this is a good step forward.

"It is critical for Chinatown to be connected to the rest of the community. Because we are one community, we are actually one neighborhood," says Assembly Member Yuh-Line Niou.

Chinatown leaders say when Park Row was shut down in aftermath of 9-11 due to security concerns it crippled economy and choked neighborhood. Been fighting to get reopened to vehicular traffic. They didn’t get that today, but say this is a start. What “this” is at 530pm on @ABC7NY pic.twitter.com/h24s2x3H53

Council Member Margaret Chin says they will continue to fight to make sure Park Row is reopened totally.

"We understand the security issue, but we also have to work towards that goal. Because Chinatown has been separated from Lower Manhattan for too long," added Chin.

Meanwhile there is a proposal to bomb proof the tunnel - it is an idea that was shown exclusively on Eyewitness News two years ago.

Congressman Nydia Velazquez says if the Democrats can take back the House this fall, she would fight for federal funding for the bomb proof tunnel.