Giants give offer to Pablo Sandoval 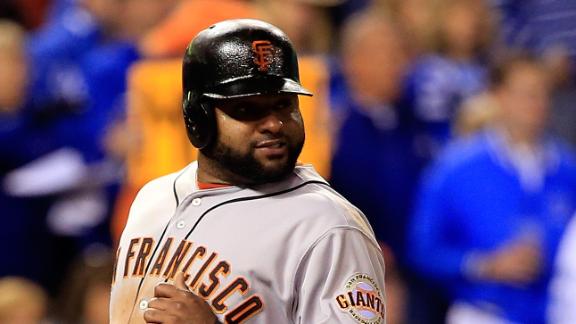 Fox Sports reported Tuesday that Sandoval has rejected the offer.Players have until Nov. 10 to accept the offer, though none of the 22 qualifying offers made in the previous two seasons have been accepted.

By making the offer, the Giants ensure they will receive draft-pick compensation if Sandoval signs with another team this offseason.

He has starred in the postseason, hitting .344 with six homers and 20 RBIs in 39 games, helping the Giants win three championships in five seasons. In Game 1 of the 2012 World Series against the Tigers, he became the first player to homer in his first three at-bats in a World Series game.

He got the nickname "Kung Fu Panda" thanks to former teammate Barry Zito, who gave him the moniker after he acrobatically avoided a tag at home plate against the Dodgers in a 2008 game.

Sandoval, who reportedly rejected a three-year, $40 million contract extension offer from the Giants in March, was paid $8.25 million in 2014.

Sandoval was one of 12 free agents to receive qualifying offers by their teams on Monday.

Giants Extend Qualifying Offer To Sandoval
Jerry Crasnick breaks down the latest on free agent Pablo Sandoval, who was extended a $15.3 million qualifying offer by the Giants.