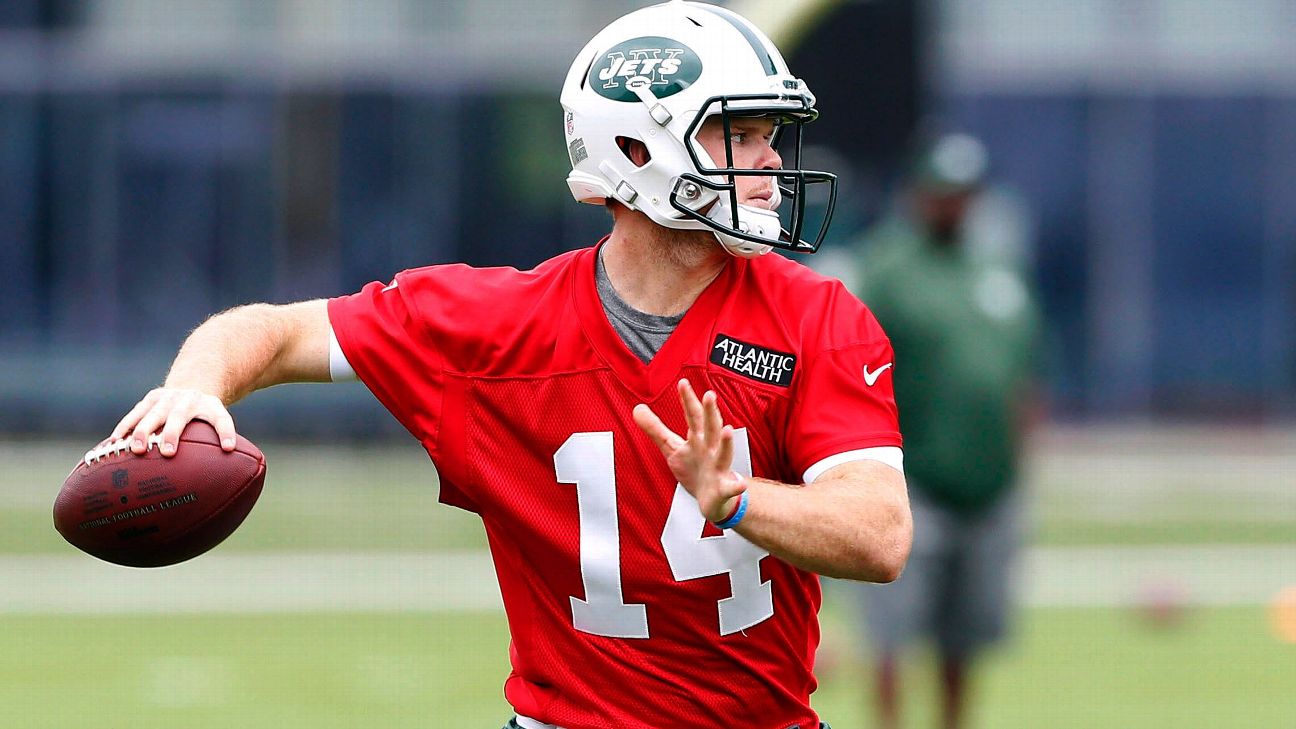 FLORHAM PARK, N.J. -- Since arriving Monday after a three-day contract dispute, New York Jets rookie Sam Darnold has impressed his new teammates with his ability to play catch-up, on the field and in the classroom.

And his voice isn't half-bad, either.

In a classic case of rookie hazing, Darnold was asked to sing in front of the team. He belted out "A Thousand Miles" by Vanessa Carlton.

The harmony is back now that the contract stalemate is over.

Speaking to reporters for the first time since signing his four-year, $30 million contract, Darnold said he has no regrets about the three-day impasse. He missed three practices, but he watched the video of the practices on his tablet from a hotel room that is walking distance to the Jets' facility.

"It sucked watching it, but at the same time, I knew what needed to be done," he said. "I knew it was necessary."

Darnold kept his arm sharp at a local high school, throwing passes to fellow CAA clients -- presumably, free-agent wide receivers that aren't in NFL camps. He also worked out at the hotel fitness room as his agent and the Jets haggled over language in the fully guaranteed deal.

"I thought it played out great," said Darnold, who received a $20 million signing bonus.

Now that he's in camp, Darnold -- drafted third overall -- will compete against veterans Josh McCown and Teddy Bridgewater for the starting job. Coach Todd Bowles has said McCown, the incumbent, is the front-runner.

On Wednesday, Darnold received a handful of first-team reps. There was a brief scare when his banged his throwing arm on a defender's helmet, resulting in an interception. He seemed shaken for a moment, but he didn't miss any reps. On the next play, he fired a long completion over the middle.

"Obviously, it's a coach's decision," he said, when asked about claiming the starting job. "The competitor in me, yeah, I want to start, but it's whatever is best for the team. ... With Josh and Teddy, it's a huge challenge."

McCown and Bridewater spoke glowingly of the rookie. Bridgewater said he has been "amazed" by Darnold's ability to take what he learns in the classroom and execute it on the field.

"I'm a huge fan of Sam Darnold," Bridgewater said. "I'm glad to be in the quarterback room with him."

That doesn't mean Darnold is immune to razzing. When he jogged on the field Monday, minutes after signing his contract, he was greeted by a sarcastic slow clap. Laughing, he said that moment "made me feel comfortable. It made me feel part of the team."

Then came his signing debut.

"He sang and it didn't bother him at all," wide receiver Terrelle Pryor said. "That's the type of guy he is. He's just even keeled. Nothing bothers him. He's a water-off-a-duck's-back type of guy. We've got something special here."
Report a correction or typo
Related topics:
sportsespnjosh mccownnew york jetsnflcontractsam darnoldtraining campteddy bridgewaterquarterback
Copyright © 2021 ESPN Internet Ventures. All rights reserved.
More Videos
From CNN Newsource affiliates
TOP STORIES