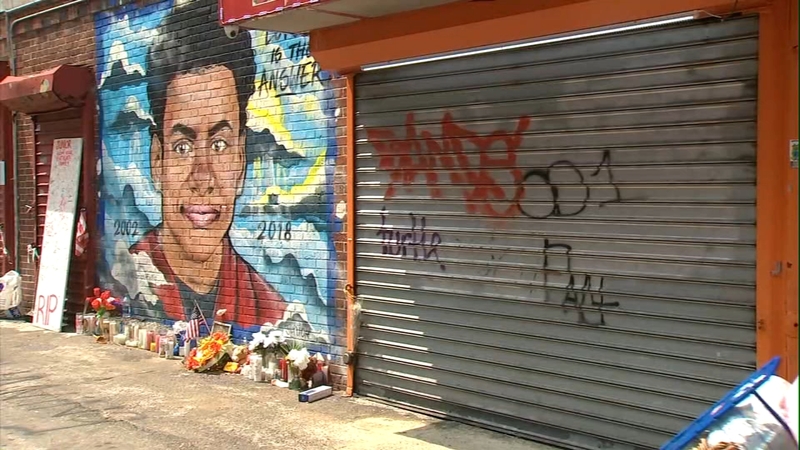 BELMONT, Bronx (WABC) -- A new owner is taking over the Bronx bodega where a teenager was brutally murdered after purchasing the store recently.

The shop has been closed since the June 20th attack but is about to reopen and the owner is asking people to give him a chance.

"I try to do the best from the heart and see what happens," said Wagner Baez. He has good reason to be concerned.

It is the very same shop where Lesandro Guzman-Feliz ran into trying to get away from his attackers, the bodega where the 15-year-old stumbled out, gravely injured, only to die a block away.

Wagner is the new owner but understands this will not be your typical grand opening.

"I only say to the community, please one chance because I working hard for a long time and it's all I say, one chance to stay here," said Baez.

The corner store is at 183rd and Bathgate Avenue in the Belmont section where Junior was killed in June.

Wagner didn't know the prior owner who many feel did not do enough to protect Junior from the suspects, though he insisted he did and told the teen to hide behind the counter.

Many in this Bronx neighborhood hoped the new owner would turn this space into a church, a community center, anything but another bodega.

"I personally will feel like I'm walking into a crime scene still and it's always going to be there, my face, my heart and everything," said neighbor Wanda Hernandez Parks.

Baez, a father of three, empathizes with people in the neighborhood and was crystal clear when asked about the murder.

"I try to forget in my memory what happened that night," he said.

Wagner, who owns two other bodegas in the Bronx, hopes to open the store Wednesday. He said he did reach out to Junior's family and asked if he could name the shop after the teenager but they turned down the offer, a decision he said he respects.

He said he plans to make small changes in the store in an effort to make people feel more comfortable.