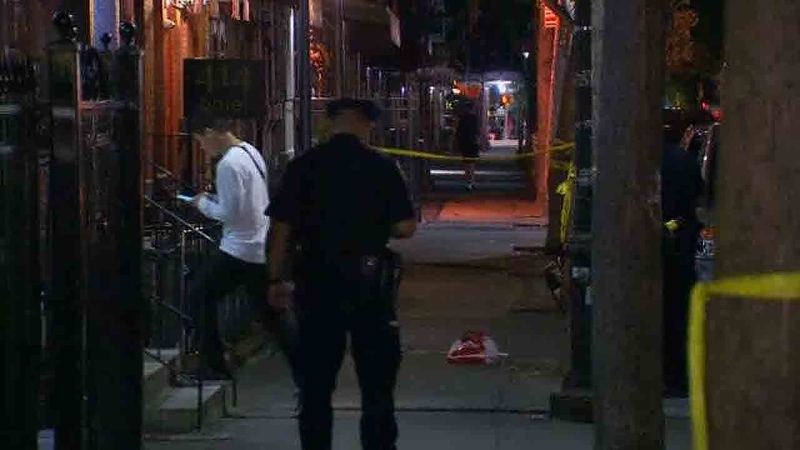 HELL'S KITCHEN, Manhattan (WABC) -- A cab driver found a man stabbed to death in the middle of the street in Hell's Kitchen early Monday.

The gruesome discovery was made just before 3 a.m. Monday on West 46th Street between 9th and 10th avenues.

Paramedics rush critically injured man to hospital but he died. #NYPD trying to sort out what happened & who stabbed unidentified man who was found lying in middle of W46th street at about 3am. The victim also had wounds to his face. #hellskitchen @ABC7NY pic.twitter.com/g1zQ12Lbjz

The man's shoes and keys could be seen lying in the middle of the street, left behind.

"He was rolling from this side in the middle of street, I thought he was drunk," said the driver, Salman Malik. "I didn't hit him, just stopped, he fell down.".

Surveillance video showed Malik stopping his car just before 3. He drives a yellow taxi and was the first person to find the victim, who had been stabbed in the chest and also had trauma to his face.

"I thought it was a garbage bag but I saw that this is a guy," Malik said. "I saw blood on his finger, he was breathing. Like within 60 to 75 seconds he stopped breathing."

Surveillance cameras show paramedics arriving and rushing to help the man, who was still alive at that point.

EMTs worked on him for about five minutes, trying to stabilize him. Once they did the victim was taken to Mount Sinai West Hospital, where he was pronounced dead.

Those who live and work in the area were stunned.

"It's so strange because for the five years I've been working here, things like that never happen," area worker Collin Chesney said.

Derick Waller reports from Hell's Kitchen on the stabbing.

Investigators remained on the scene, which is very close to Times Square and tourists. Teams of NYPD officers checked every inch of West 46th Street. Detectives are also looking at surveillance footage from area buildings.

Sonja Milsom and her friend are visiting the city.

"I love this city," Milsom said. "I think it's a positive, amazing, vibrant, alive city, and sometimes people get passionate and sometimes that has bad results."

But for one longtime neighbor, it doesn't matter that the city is technically safer. Thomas Prokopowicz-Godwin said there are still prostitution and drug deals.

"If you ever want to get high, just walk the block, you know, take whiff, and you don't have to pay for it," he said.