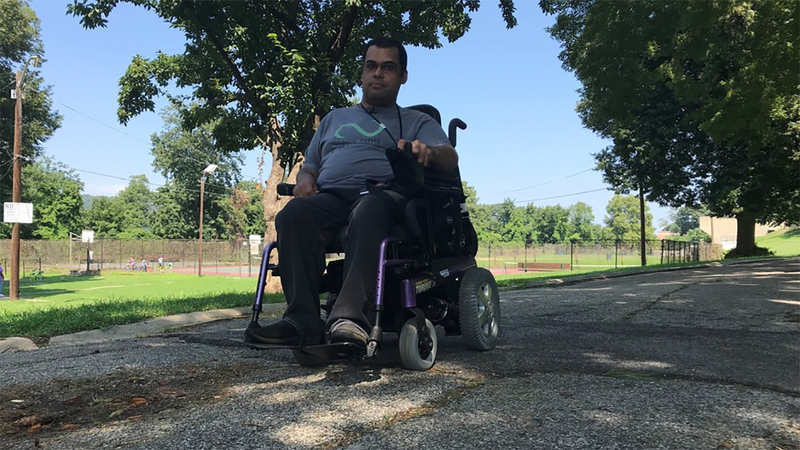 YONKERS, Westchester County (WABC) -- A Metro-North rider who uses a motorized scooter says a trip to buy groceries turned into a nightmare commute because of a broken elevator at the Glenwood station in Yonkers.

CJ Shearn said he left his house with his home-aide around 4:30 p.m. on Friday, August 17, and took the Hudson line from the Glenwood station, about 157 feet from his home, one stop south to Yonkers station.

From there, Shearn said he and his aide grabbed a bite to eat and picked up groceries from a nearby Shop Rite.

Shearn said they caught a northbound train back to Glenwood around 8:30 p.m. but when they arrived, the elevator he requires to get off the train platform had broken down.

"I was stuck," Shearn said.

Shearn said he called the MTA police for help.

"They said, 'There is nothing we can do, you have to find an alternative form of transportation,'" Shearn said. "All they needed to do was have someone carry me and my chair."

Shearn said police advised him to take the northbound train one additional stop north and double back southbound.

Shearn said he followed their instructions and took the next northbound Metro-North train to Greystone, then circled back to Yonkers station where he exited the train to catch a bus home.

Shearn said he took the 11:11 p.m. 'No. 1' bus to Warburton and Glenwood Avenues near his home, but because the bus stop is at the top of a hill, too steep for his scooter, Shearn said he had to take the long way home, cutting through a park.

"That's a notorious park," Shearn said. "There are things going down there sometimes and it's not a good feeling to be stuck there."

Shearn said the whole trip back from the grocery store took him about four hours to complete.

"This was in the middle of a pouring thunderstorm. Lightning was coming down. It's lucky that I'm alive," Shearn said. "All for groceries, it's just crazy."

An MTA spokesperson told '7 On Your Side Investigates' crews repaired the elevator at the Glenwood stop about four hours after the MTA became aware of a mechanical issue.

She added that MTA elevators are inspected on a 70-day cycle by electricians and machinists in addition to a 6-month and yearly check conducted by an outside inspector.

"We regret that a valued customer had his trip lengthened as a result of this rare elevator malfunction. Metro-North's elevators function properly 98.4% of the time; when we learn of an outage we mobilize immediately to make repairs. In this case, it was completed within four hours. Based on the circumstances, MTA Police officers acting with Mr. Shearn's safety in mind offered the safest alternative available and stayed with him until he had boarded the next train. Our officers were not willing to put Mr. Shearn in jeopardy by risking the type of mishap that could result from carrying a man in a motorized wheelchair up and down a flight of stairs," wrote Metro-North Spokeswoman Nancy Gamerman, in a statement.

Real-time elevator status is also available online and on the MYmta app.

While Shearn said he is grateful the elevator has been fixed, he said he wishes the MTA had more alternatives for people in his position.

"I felt humiliated. The next morning I actually cried for quite a long time because it felt so humiliating," Shearn said. "I don't want anyone else with a disability to have to go through this."


If using the app, click here to send us a news tip