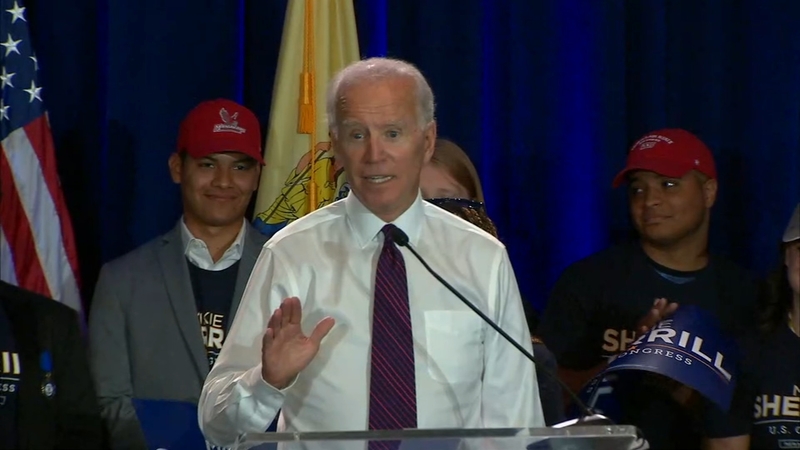 The open seat was Republican but is now being targeted by Democrats in the midterm elections.

Biden says he'll decide by January whether he'll run for president in 2020. On this day he was campaigning for Mikie Sherrill, who's running for Congress. But all eyes were still on the former Vice President.

"Well, I'm sick and tired of being sick and tired about what's going on in this country today," Biden said. "The diminishment of our values. I've had it up to here. This is not who we are."

The election November 6th is a referendum on President Donald Trump. Has he done a great job? Or are voters like Biden sick of what he's done?

Democrats need only 23 seats flipped from red to blue to take the House back from Repubican control, and polling shows that is likely because Trump is so unpopular.

In New Jersey, Republican candidate Jay Webber stresses the economy and the good old days of Ronald Reagan. He doesn't say very much about Trump.

"I like a lot of what the president does," said Webber. "I don't like everything he tweets or says. But the country is on the right track."

Sherrill, the Democrat, was a fighter pilot and former federal prosecutor. Wednesday, she said nothing about Trump, but said she's hoping to win the traditionally Republican seat by talking about values like honor and integrity.

"But I know you're here today because these virtues are timeless and because our country is counting on you," said Sherrill. "In fact I'm really counting on you. We have nine weeks, we have a lot to do."

The latest polling out this week has good news for Democrats; President Trump's approval rating is down significantly and Democratic chances in the House are up with just two months to go before Election Day.