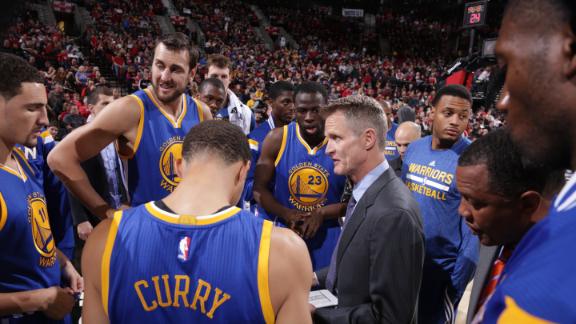 "I have a tremendous amount of respect for Mark Jackson and what he accomplished as our head coach," Lacob wrote in an email to the Bay Area News Group. "He did a terrific job. I've said that many times over the last several months and in recent days, including at this week's event.

"I was asked to draw comparisons earlier this week between building businesses in the tech world and the sports world and, unfortunately, I used some poor judgment. That's my mistake. I did attempt to reach out to Mark on Friday, and I certainly apologize for my comments and any unintended harm. I know that Mark will succeed again in this business."

On Wednesday, Lacob explained details behind Jackson's firing to InsideBayArea.com, including that the coach was disliked by many in the organization.

Of the firing, Lacob said, "Part of it was, he couldn't get along with anybody else in the organization. And, look, he did a great job -- and I'll always compliment him in many respects -- but you can't have 200 other people in the organization not like you."

Lacob described Jackson's style as something the Warriors initially needed to change for the culture of the organization, even though Jackson was an inexperienced coach who the owner said "didn't know X's and O's, really."

Lacob said the key was to hire an experienced staff around Jackson, an idea that was met with resistance from him.

"You can't have a staff underneath you that isn't that good," Lacob said. "And if you're going to get better, you've got to have really good assistants. You've got to have people that can be there to replace you. We all know this from all of our companies. It's ... Management 101."

Jackson, now an ESPN analyst, was fired in May after helping the Warriors to a 51-31 regular-season record and a first-round playoff showing last season. After the firing, he said he regretted his handling of two assistants at the end of the regular season. The Warriors reassigned Brian Scalabrine to the D-League because of what Jackson called a "difference in philosophies." Then the Warriors fired Darren Erman on April 5 for reportedly recording conversations during coaches' meetings and discussions between coaches and players without their knowledge.

First-year coach Steve Kerr, hired to replace Jackson, has the Warriors off to an NBA-best 17-2 record.