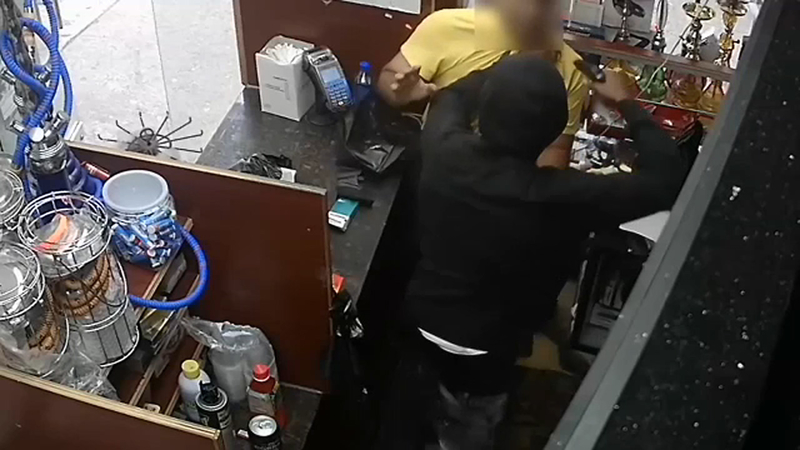 BRONX, New York City (WABC) -- Police are looking for the suspect in a violent attempted robbery at a deli in the Bronx, and they are hoping surveillance video will lead to an arrest.

Authorities say the suspect first placed a food order at the Habibi Deli on East 187th Street around 11 a.m. Monday. He proceeded to walk behind the counter and display a gun, demanding cash.

The owner, a 38-year-old man, hesitated to hand over the money, and a violent struggle ensued.

The suspect struck the owner multiple times with the gun before the victim as able to wrestle the weapon away. The suspect fled southbound on Hoffman Street, leaving the victim was left with pain and bruising to his head and face. He was treated and released at a nearby hospital.
He told Eyewitness News he was determined to protect his store and the other two workers inside.

"It was kind of a weird feeling for me, because I've never been in this situation before," he said. "He put the gun to my neck. He told me first, 'Give me the money or you're going to die.'"
EMBED More News Videos

Kemberly Richardson has the latest on the armed robbery at a Bronx deli.

The newlywed and expecting father said he was not going to give in for the sake of his business and his employees.

"I tried to move the gun towards him, so if he shooting, like, he'll shoot himself," he said. "He's trying to, looking where the money, where I put the money. At this point, I'm feeling like I can grab (the) gun from him, so I attack him and take gun from him, and then start fighting."

The surveillance video captured the entire incident, as well as several customers seeming to calmly enter and exit the bodega without intervening, despite witnessing the struggle.

"I'm kind of worried, definitely," the owner said. "I have trust with God and St. Mary, and I think they will let anything bad happen to me."

The suspect was described as a black male in his 20s. He was last seen wearing a blue sweatband, a black hooded sweater, dark colored jeans and black sneakers. He also had a black backpack.

Anyone with information regarding this incident is urged to call the NYPD's Crime Stoppers Hotline at 1-800-577-TIPS (8477) or for Spanish, 1-888-57-PISTA (74782). The public can also submit their tips by logging onto the Crime Stoppers website at NYPDCrimeStoppers.com or by texting their tips to 274637 (CRIMES) then enter TIPS577. All calls are strictly confidential.