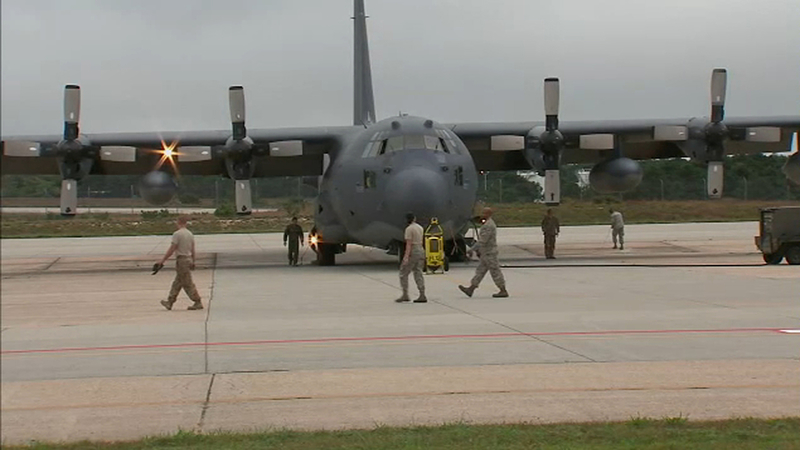 WESTHAMPTON BEACH, Long Island (WABC) -- The New York Air National Guard 106th Rescue Wing, based in Westhampton Beach, is sending a team to Florida to help with the response to Hurricane Michael.

Captain Michael O'Hagan said the rescue wing is sending a team of 75 people, a plane, a helicopter and two boats. Half of the team will leave Wednesday, the other half Thursday.

"We'll get in position, we'll get in place, we'll kind of offer up our capabilities and let the local civil authorities and everyone that we're working together with understand and know what we can do, what we bring to the fight," he said.

Those living in Florida's Panhandle may need all the help they can get. Wind gusts have been reported at 130 miles per hour from the Category 4 storm. Dangerous flooding is also expected in some spots.

The 106th Rescue Wing just returned from assisting people living in North Carolina after Hurricane Florence. They were part of a team of 180 Air National guardsmen who made a total of 19 saves in just one day there. However, compare that to the 586 rescues the team had during Hurricane Harvey in Texas last year, Florence wasn't nearly as bad.

"Everyone was kind of ready to do more, and the need was not as great, so that was kind of like a really incredible warm-up," O'Hagan said.

In addition, the New York Army National Guard is preparing to deploy two CH-47 Chinook heavy lift helicopters to Tallahassee, Florida from the Army Aviation Support Facility at Rochester International Airport with as many as 20 Soldiers in support.

"New York understands the devastation that extreme weather can cause, and we stand ready, willing and able to help the states impacted by Hurricane Michael," Gov. Cuomo said. "New Yorkers are always ready to help those in need, and we are committed to providing personnel, equipment and teams to help our southern neighbors recover as quickly as possible."