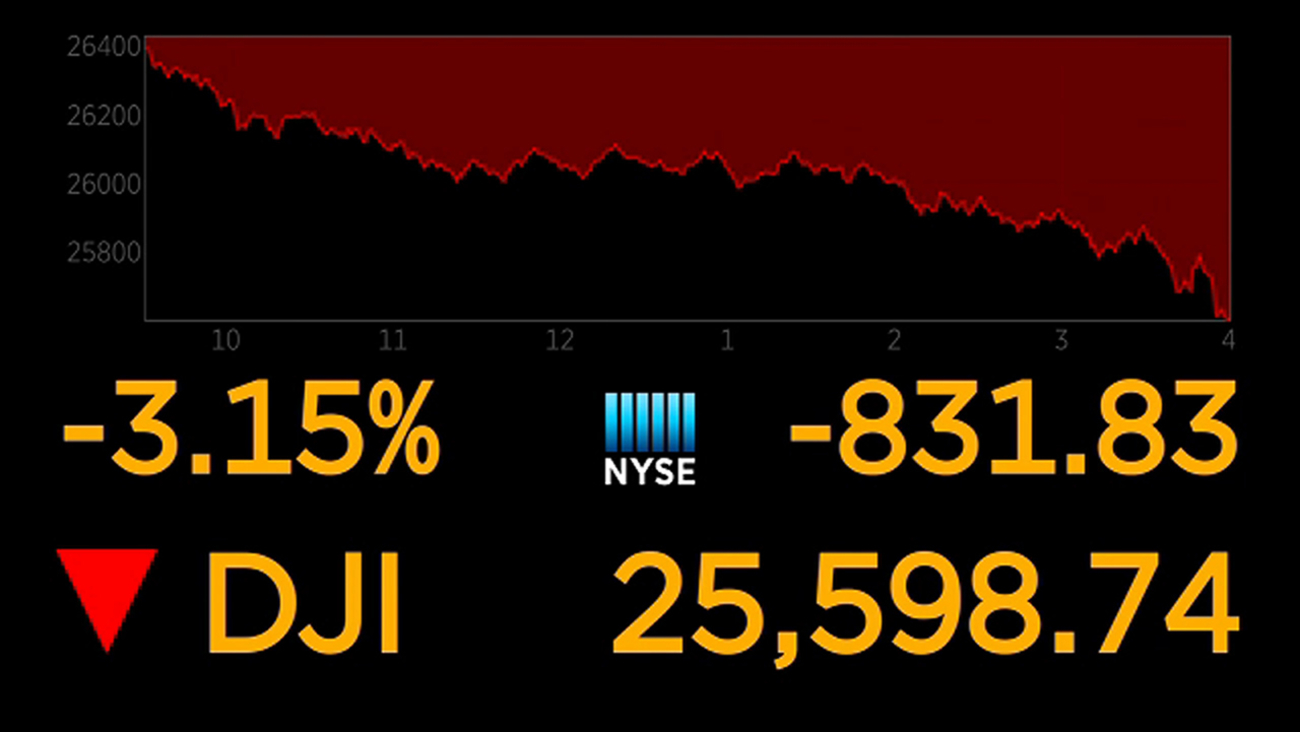 Although the losses were widespread, stocks that have been the biggest winners on the market, including technology companies and retailers, suffered steep declines. Apple and Amazon both had their worst day in two and a half years.

The Nasdaq composite, which has a high concentration of technology companies, suffered its biggest loss in more than two years and has dropped almost 8 percent since the start of October.

Stocks have slumped over the last week as a combination of strong economic data and positive commentary from Federal Reserve leaders sent bond yields rocketing higher as investors bet that interest rates will keep rising.

Big moves in interest rates tend to unsettle investors, and they can also push them to sell stocks and buy bonds instead. And there is still an overhang from the U.S. trade dispute with China, which accounts for sizeable portions of some tech companies' revenue.

"The tax cuts juiced earnings this year and that's not sustainable," he said. "The market's starting to say that the glass may be half empty."

The market had enjoyed a stretch of relative calm, where even big intraday losses were erased by the end of the day. But over the past five days, the losses stuck, and on Wednesday the selling went on right to the closing bell.

Amazon has soared 50 percent this year, but has fallen 14 percent from its all-time high in early September. Alphabet has dropped 15 percent since late July.

Insurance companies dropped as Hurricane Michael continued to gather strength and came ashore in Florida bringing winds of up to 155 miles an hour. Berkshire Hathaway dipped 4.7 percent to $213.10 and reinsurer Everest Re slid 5.1 percent to $217.73.

Although the yield on the 10-year Treasury declined toward the end of the day, its jump from 3.05 percent early last week to more than 3.20 percent - a seven-year high - has spooked investors. The yield was just 2.82 percent in last August.

Bond yields and therefore interest rates have been rising for more than two years as the U.S. economy grew strong. When yields rise for that reason, it is generally good for stocks. But eventually the high rates worry stock investors, as higher rates tend to increase borrowing costs and cut into profit margins. They also make bonds more attractive investments.

Technology and internet-based companies are known for their high profit margins, and many have reported explosive growth in recent years, with corresponding gains in their stock prices.

Gina Martin Adams, chief equity strategist for Bloomberg Intelligence, said the stocks have become more volatile in the last few months because investors have concerns about their future profitability.

"Amazon recently announced they were increasing wages, Facebook is spending a ton on security," she said. "Semiconductors have the most exposure to China out of segments in the S&P 500."

Sears nosedived after the Wall Street Journal reported that the struggling retailer hired an advisory firm to prepare a bankruptcy filing that could come within days. The stock fell 16.8 percent to 49 cents. It was more than $40 five years ago.

Sears has closed hundreds of stores and sold several famous brands or put them on the block as it sees more customers abandon its stores.

Stocks from emerging markets were also hard hit. Investors see many of these countries as being vulnerable to higher U.S. interest rates, which can pull away investment dollars. Brazil's Bovespa lost 2.5 percent and the Merval in Argentina sank 2.2 percent.