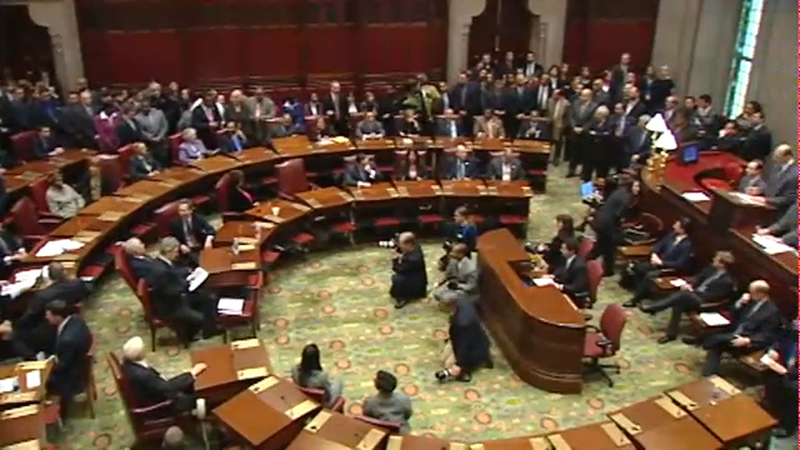 BAY RIDGE, Brooklyn (WABC) -- Democrats in New York are hoping to flip control of the State Senate in the Nov. 6 election.

One of the seats targeted is a district in southern Brooklyn where Marty Golden has been in office for 16 years, despite Democrats outnumbering Republicans there by nearly 2 to 1.

The district stretches from Bay Ridge to Gerritsen Beach.

On Thursday Golden blasted the recent parole of Herman Bell, convicted in the 1971 killing of two city police officers.

"Governor, parole board, keep him in jail where he belongs!," said Golden. "Do not send him back to the streets and the state of New York!"

Golden went on to claim Gov. Cuomo and Gounardes supported Bell's release after more than 40 years in prison.

"I mean Marty Golden continues to lie about my position, on my record and that's really shameful for him doing that," said Gounardes. "I don't agree with what the parole board did. I think what they did is wrong. Look, if you kill a cop you should stay in jail."

Gournades is hoping he plays a role in flipping the State Senate in Albany from red to blue. And he's doing so by talking about President Trump.

"Marty Golden is the most pro-Trump Republican anywhere in Brooklyn and probably New York City for that matter," he said. "We need someone who's going to stand up and make sure New York is leading the way forward."

Anti-Trump sentiment could also hurt Golden. But he said Republicans play a critical role in Albany in keeping things fair.

"Because you need a balance in government," said Golden. "The Republican Senate keeps the Assembly, the Democratic Assembly in check. And unfortunately they keep us in check."

Right now Republicans in the State Senate have a one vote majority out of 63 senators. So election day, November 6, could play a big role in determining whether that national blue wave also sweeps through this part of Brooklyn.