ESPN
By Chris Mortensen and Adam Caplan and Adam Schefter 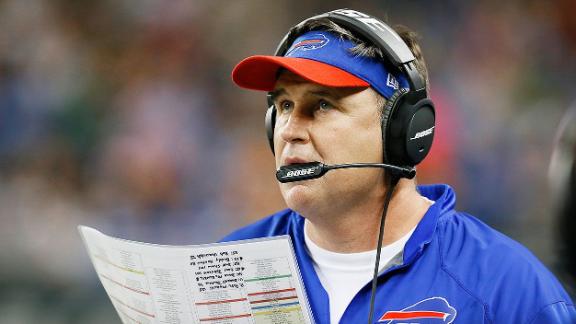 Doug Marrone has opted out of his contract as coach of the Buffalo Billsand is now a free agent to pursue other jobs.

Marrone exercised the unique option during the final hours of a three-day window that opened Monday, stipulated in the four-year contract he signed with the Bills in 2013. The opt-out clause was included in the original contract in the event of an ownership change, which occurred when Terry and Kim Pegula purchased the franchise in October.

"We are disappointed that Coach Marrone will no longer be an important part of our organization," Bills owner Terry Pegula said in a statement. "We thank him for all of his hard work and leadership during his tenure and wish him and his family the best with the next chapter in their lives.

"We will now begin the important process of conducting a thorough search for a new head coach as we continue to strive to reach our goal of returning to the playoffs and bringing a championship to Buffalo for our fans."

While Marrone was negotiating an extension beyond the two years remaining on his four-year, $16 million deal, uncertainty over potential organizational changes influenced his decision, according to sources.

Marrone's clause also allows him to walk away with his 2015 guaranteed base salary of $4 million without it counting as an offset against any future salary even if he should land another job, sources said. Marrone now is free to negotiate with any team seeking a head coach.

Teams with current vacancies include the Chicago Bears, Atlanta Falcons, New York Jets, Oakland Raiders and San Francisco 49ers. Marrone is scheduled to interview with the Jets on Sunday or Monday, and has also set up interviews with the Bears and Falcons, according to aNew York Post report.

When Marrone interviewed for a handful of jobs in 2013, he was offered the head-coaching position by the Bills and Browns and was a finalist with other teams when he agreed to coach the Bills.

Bills sources believe that Marrone could have particular interest in the Jets, where he once served as offensive line coach for four years. Sources say the Jets will have strong interest in Marrone.

"I just found out Doug Marrone is available. We will look at him," owner Woody Johnson told the New York Daily News. "He is a coach who was with us. And I know him a little bit."

Although it is believed that Marrone would take some of his assistant coaches with him, most of them have contracts through 2015, according to a team source. Defensive coordinator Jim Schwartz's deal is believed to run through 2016.

Under Marrone, the Bills went 6-10 and 9-7 while struggling to find a quarterback. E.J. Manuel was a first-round pick in 2013 who suffered injuries and eventually was benched after Week 4 this season.

The Bills signed Kyle Orton late in preseason to take over the position. Orton announced his retirement this week. The team also traded its 2015 first-round pick to draft wide receiver Sammy Watkins with the fourth overall pick in the 2014 draft.

Marrone's decision to step down caught some players by surprise, coming after the Bills' first winning season since a 9-7 finish in 2004. Buffalo, however, missed the playoffs to extend the NFL's longest active postseason drought to 15 seasons.

"Surprised me. Didn't see it coming," center Eric Wood said in a text message to The Associated Press.

Marrone was hired in Buffalo after four seasons at Syracuse, where Marrone helped revive his alma mater's struggling program.

On Monday, Marrone sidestepped a question about his future when asked whether he would consider opting out of his contract.

"I do not discuss my contract. That's my rule. I never have and never will," he said.