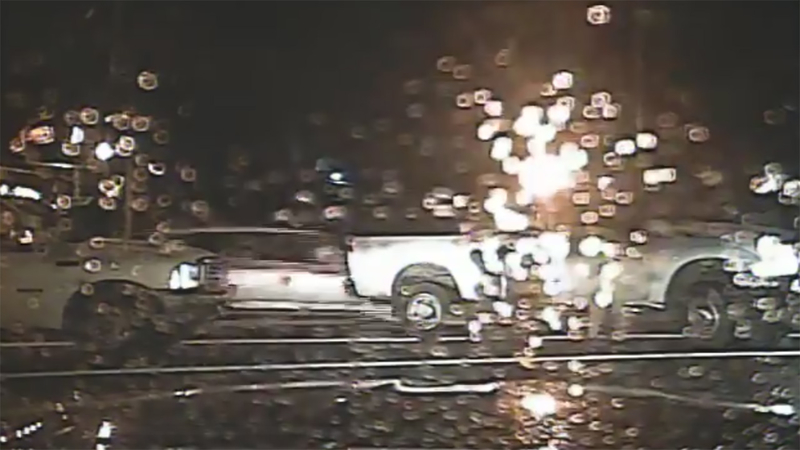 GLEN ROCK, New Jersey (WABC) -- A New Jersey police department is highlighting a terrifying video to stress the importance of the state's "move over law."

It requires drivers approaching public safety, towing and maintenance personnel on the roadway to move over one lane, or if it's not safe to move over, to slow down below the posted speed limit.

The video captured by a Glen Rock police vehicle just before 1 a.m. on Saturday, October 27, shows an SUV slamming into a Department of Transportation truck.

"I was just on night shift, and I like to observe vehicular traffic," he said. "I was there for maybe 15, 30 seconds, just explaining where the deer was, which was a little further that way, and that's when the car came."

The SUV slammed into the DOT truck, flinging a DOT worker into the roadway. That worker was almost struck by oncoming traffic, but the second car slowed down and narrowly avoided hitting him.

Amazingly, no one was seriously injured in the incident.

"It is pure luck that no one was killed out there," Police Chief Dean Ackerman said. "Every year in this country, more officers are killed by traffic related incidents than by gunfire."

Officer Donnelly knows it's a dangerous job, but if drivers are more careful, it could save lives of other officers and emergency responders.

"Let's hope this is my only close call for at least the next few years," he said.

The department says officers assisting with roadside incidents, utility construction and directing traffic in front of the Glen Rock High School are often confronted with distracted or impatient motorists.

They say adhering to the law can save lives.