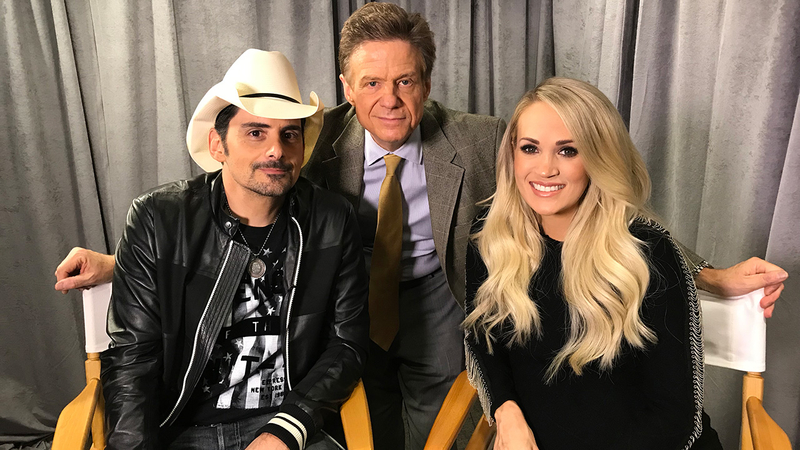 NASHVILLE, Tennessee (WABC) -- Country music royalty gathers in Nashville Wednesday for what's called "Country Music's Biggest Night" - the CMA Awards. And once again, the show will be hosted on ABC by Brad Paisley and Carrie Underwood.

It marks the 52nd time the Country Music Association has given out the trophies, and the whopping 11th consecutive time the country superstars have hosted the telecast. The two say they work on their own material and "don't settle for anything that doesn't sound like us."

Paisley and Underwood have found their groove after more than a decade of hosting the CMA Awards together, but their return is even more meaningful this time given the injuries Carrie sustained after a fall outside her home shortly after last year's show.

Paisley was one of those friends.

"In country music, too, we're a really supportive group," he said. "And it's going to be a fun night to get up there, especially for (Underwood), and for all of us to get back up there on that stage and try to have fun."

The rapport both stars enjoy is enhanced by a common background. Paisley is from West Virginia, while Carrie hails from Oklahoma.

"There's just something about growing up a little bit the same that you just kind off understand a little more about each other," Underwood said.

Paisley said he found that to be true from the first time he met Underwood.

"Absolutely," he said, adding he has particular respect for the way Underwood handled fame because it came so quickly for her on "American Idol."
Other hopefuls are getting the same chance to be discovered, and "Idol" is teaming up with the CMA Awards. Fans will get to send one lucky singer through to Hollywood, along the same road Underwood once traveled.

She says she is simply "glad to be a part of giving more people like me a chance."

Underwood is up for an award this time for Female Vocalist of the Year, an honor she has already received four times. Paisley will debut a new song called "Bucked Off."

Sandy Kenyon has the latest on the upcoming award show.