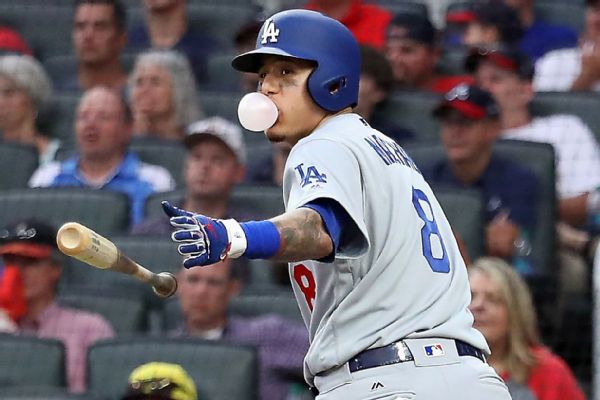 ATLANTA -- Flush with cash, the New York Yankees may take a run at Manny Machado.

But first, the slugging infielder would have some explaining to do.

Arriving in Atlanta for two days of owners meetings at a hotel next to the Braves' SunTrust Park, Hal Steinbrenner discussed the state of a team that has one of baseball's most dynamic young rosters but came up short in the playoffs the last two seasons.

The Yankees owner has plenty of money to spend after coming in under the luxury tax threshold last season for the first time since the penalty took effect in 2003. While the top priority is starting pitching, New York is also mentioned as a contender for one of the winter's biggest free-agent prizes.

Machado is a dynamic player but comes with plenty of baggage, including the reputation as a dirty player and his admission that he's "not the type of player that's going to be Johnny Hustle" after he jogged out a ground ball during the National League Championship Series.

"Certainly, those comments are troubling," Steinbrenner said during a meeting with a small group of reporters in the hotel lobby. He quickly added that it would be the job of general manager Brian Cashman to determine whether the comments would disqualify the Yankees from pursuing such a player.

New York needs a shortstop for at least the first half of 2019 after Didi Gregoriushad to have Tommy John reconstructive surgery after blowing out his throwing elbow in Game 2 of the American League Division Series.

"If we're interested in any player, we sit down with them face-to-face with their agent and ask them, 'Where did this come from? What context was around the entire interview? What point were you trying to make? How do you justify it?'" Steinbrenner said. "Because that ain't going to sell where we play baseball."

"We have a great clubhouse," the owner said. "They just don't put up with a lot of nonsense from players, whether it's a rookie just coming up or new players -- even if they're veterans -- coming in. That's a problem I'm less worried about. But makeup is a big part of what we look at. It's not just analytics."

Machado doesn't seem to be a priority. Mimicking Cashman's recent comments at the general manager meetings in California, Steinbrenner said the shaky starting pitching must be addressed.

Masahiro Tanaka was the only starter to last five innings against the Red Sox in the ALDS. J.A. Happ, Luis Severino and CC Sabathia each took a loss after combining to give up 14 earned runs in eight innings for a 15.75 ERA.

"We have to add pieces," Steinbrenner said. "Our starting pitching struggled in October. That was obvious. Tanaka was the only one who had good start."

Steinbrenner didn't rule out another huge contract. The Yankees already have Giancarlo Stanton, who is guaranteed $270 million over the next decade unless he opts out of the deal following the 2020 season.

Machado is likely to seek an even bigger deal.

"Who is the person? How old are they? What are their abilities? What is their injury history? Do we really need that particular position?" Steinbrenner said, describing how he would approach another megadeal. "I'm not against looking. We will leave no stone unturned."

In the end, the mantra is simple: World Series or Bust -- especially after the rival Red Sox claimed another World Series championship.

"Look, our goal is to win the world championship, so it's going to hurt me no matter who it is," Steinbrenner said. "But clearly, having our biggest rival do it hurts more. Absolutely."

Steinbrenner said he's hopeful his late father will be selected for the Hall of Fame. George Steinbrenner is among 10 candidates on the Today's Game Era ballot, which will surely set up plenty of debate over whether seven World Series titles and 11 AL pennants are enough to offset two lengthy suspensions from the game. "I feel he deserves to be in, and a lot of other people do too," Hal Steinbrenner said. "I think it's just a matter of time."