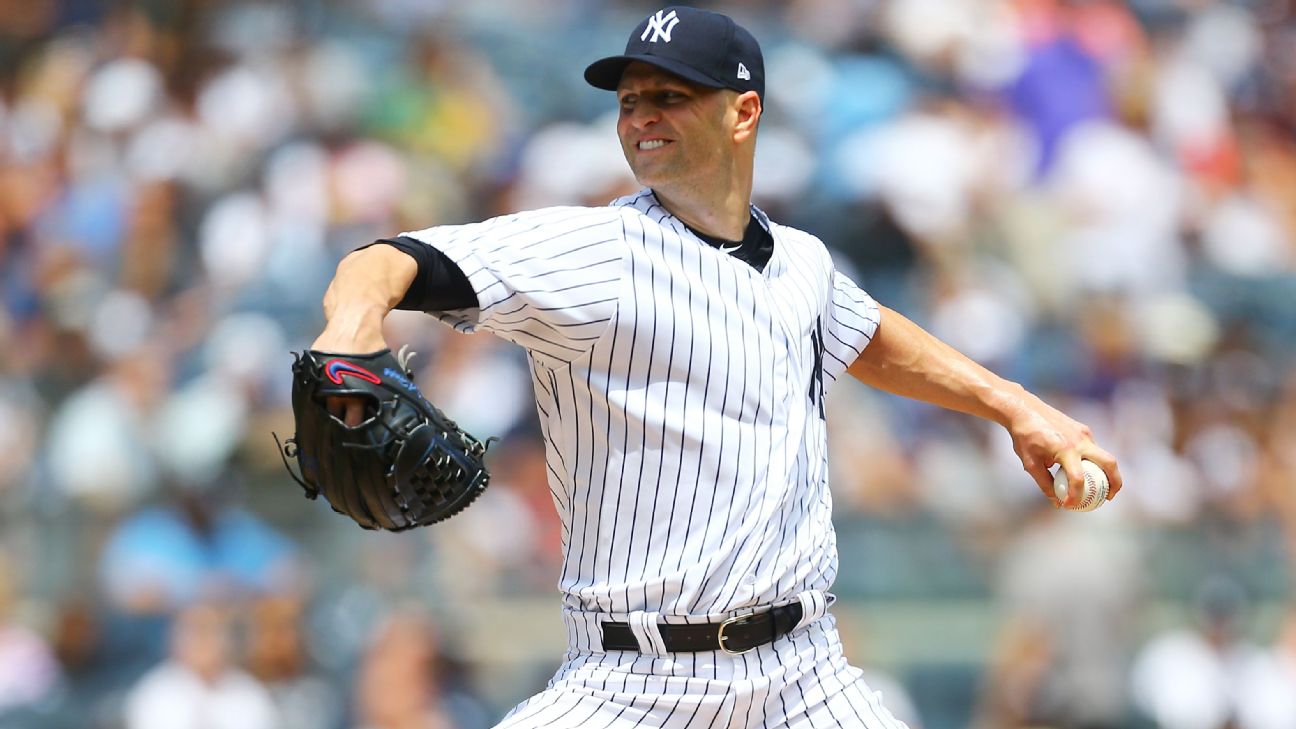 NEW YORK -- When their pitching staff took a beating in this year's American League Division Series, it became painfully clear to the New York Yankeesthat it was time for an overhaul.

But as it stands in the wake of the reacquisition of lefty J.A. Happ at the end of the winter meetings-- a transaction that was finalized Monday -- that overhaul doesn't appear nearly as dramatic as they might have hoped.

Maybe the real drama wasn't supposed to come on the pitcher's mound after all. Maybe it was supposed to come from elsewhere on the field. Say ... shortstop? Perhaps before this week is over, superstar free agent Manny Machado will be the big fish the Yankees have been looking to reel in.

In the meantime, rebuffed by Corbin, overlooked by Eovaldi, unable to work out a move (yet) for Kluber or Bauer and not an apparent serious suitor for Syndergaard, the Yankees have had a difficult time making the blockbuster pitching splash their fan base has so desperately wanted since aceLuis Severino'splayoff debacle against Boston.

Although they didn't leave Las Vegas empty-handed, it was clear before the end of the meetings they wouldn't be heading home with the massive jackpot anticipated two months ago.

Tack on already-under-contract veterans Severino andMasahiro Tanaka (and, until New York finds a suitable trade partner, Sonny Gray), and there is the rotation, for now, entering spring training.

That's a solid group. There are possibly three, maybe four, 15-game winners there. But is this a staff that can win a World Series, particularly given the competition within their own division from the Red Sox? As it stands right now, they might not be done adding starters.

Happ's signing "doesn't preclude us from being open-minded from any other options that develop over time," general manager Brian Cashman said at last week's winter meetings.

Naturally, "over time" could apply to next week, or next month. It also encompasses potential in-season moves that might arise, la Happ's late-July acquisition.

One name to watch in the short term: Yusei Kikuchi, the star lefty of Japan's Nippon Professional League who is reportedly visiting with MLB teams in the United States this week. Cashman said the Yankees have had conversations about Kikuchi with his agent, Scott Boras.

Whether Kikuchi or some other pitcher joins the Bombers in the Bronx, and considering how the free-agency market evolved following the signings this month of Eovaldi and Corbin with Boston and Washington, respectively, the Yankees did an admirable job in landing Happ.

After all, Happ, who reportedly wanted a three-year deal, entered the winter meetings as one of the best starters still available. New York got him to come back on a two-year contract with a vesting option on a third year. It also helps the Yankees know what they're getting in the 36-year-old who spent the final two months of the season with them. A mound tactician, Happ methodically pitched his way to a 7-0 regular-season record in 11 starts after being acquired from Toronto at the deadline.

"He was a performer. He took the ball every five days. He was a competitor. He came as advertised," Cashman said. "A real pro. Had a veteran presence within that clubhouse. Knew exactly what was necessary and brought it every five days in the most competitive division in all of baseball and the world.

"He checks all the boxes on that side of it, and that's why he's an attractive target in free agency. Because he's made himself that, and he's done that consistently for quite some time."

Along with Happ, the soon-to-be-19-year-veteran Sabathia returned earlier this offseason, maintaining his status as one of the players who dictates the tone of the clubhouse.

In Paxton, the Bombers get the kind of elite strikeout artist they sought. The problem, though, was the strong belief they would add more than just Paxton this offseason.

Aside from another front-line arm, what more could the Yankees add to appease a fan base itching for its 28th championship? A certain middle infielder with a Gold Glove, a cannon for an arm, and a bat with timely, big-moment pop would suffice.

That describes Machado, though members of New York's brain trust have expressed concern over comments the then-Dodgers shortstop made about running hard during the World Series. Machado said he isn't "the type of player that's going to be 'Johnny Hustle,' and run down the line and slide to first base ... That's just not my personality, that's not my cup of tea, that's not who I am." A conversation or two about those words will most certainly be part of his visit to the Bronx on Wednesday (and likely his expected trip to Philly on Thursday).

Comment controversy aside, Machado seems a perfect fit. The shortstop would more than adequately fill the shoes of the injured Didi Gregorius, who could be out until July or August as he rehabs from Tommy John surgery on his throwing arm. After Gregorius, who is entering the final year of his contract, returns, perhaps Machado slides over to third base, where he started his career in Baltimore.

How open might third base be by that point in the season? Well, the position could be fully vacant well before then. New York is reportedly interested in trading Rookie of the Year runner-up Miguel Andujar, whose poor defense has been the only blemish on his otherwise stellar play, perhaps in a deal for another big-time arm.

If that doesn't happen this offseason, perhaps the Yankees use Andujar as a trade chip by next July's deadline. That would time out well for Machado to make the move back to his old position -- assuming he's open to doing that.