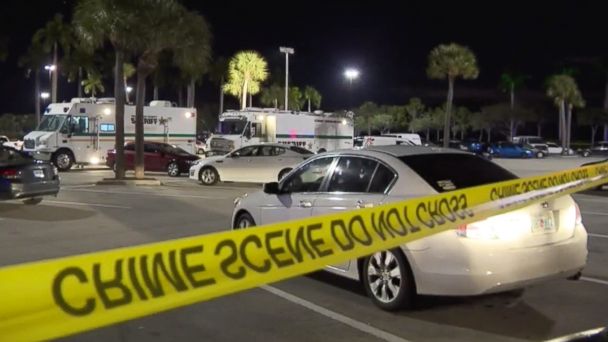 Police in Wellington, Florida, hailed a police dog as a hero for saving the lives of officers in a shootout outside a shopping mall packed with last-minute shoppers on Christmas Eve. The dog, Cigo, was shot and killed by the suspect, police said.

The tactical team witnessed multiple suspects with the man wanted for alleged murder on surveillance video, and the decision was made to try and take them into custody when they got to their vehicle outside just after 5 p.m.

Bradshaw said two people surrendered to authorities while the third suspect took off.

A K9 was released to try and take the suspect down, and it was allegedly shot by the man. The sheriff's office said the suspect was a "known gang member."

Bradshaw said the suspect continued to shoot his weapon and the deputies returned fire. The suspect was struck by at least one bullet. The suspect is in "bad shape" at the hospital, according to police.

"As it stands right now, we've got two very dangerous people off the street," Bradshaw said. "Unfortunately, it took the life of one of our dogs, but he did his job. He saved the lives of the deputies."

Cigo was taken to a veterinary emergency center where he died.

"It's difficult anytime you lose a dog, but remember the dog did his job," Bradshaw said. "He saved those deputies' lives and gave them an opportunity to take this person into custody as he randomly fired at the first person he sees. Fortunately it was the dog and not the deputies."

No civilians and no officers were injured in the shootout.

"It was chaos," Michelle Avery, who works at a store in the mall, told Miami ABC affiliate WPLG. "It was like the things you see on TV, but you think you'll never be subject to this kind of situation."