5 takeaways from the 5th Democratic debate 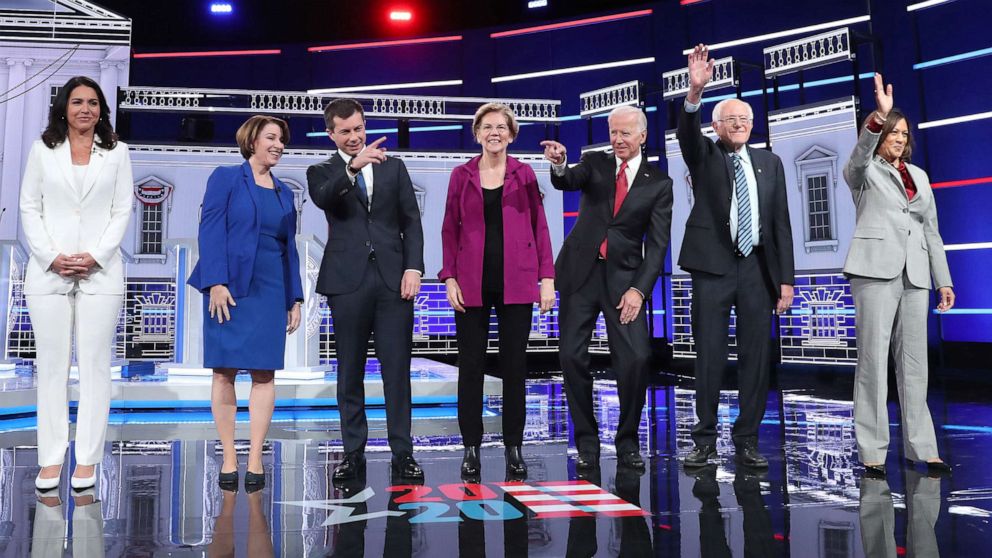 The Democratic primary's top 10 polling candidates appeared in Atlanta and the debate matchup featured a night of mostly civil exchanges over the party's policy rifts and plenty of tailored pitches as the candidates continued to court a still unsettled electorate less than three months before the first primaries.

In one of the last primary debates of 2019, hosted by MSNBC and The Washington Post, the contenders continued to boast a united front on one of the key dominating external forces looming over the primary -- the impeachment investigation into President Donald Trump -- but the splintered field still showcased their differences over issues including health care, climate change and foreign policy over two hours of debate.

Over the past month since the October debate, Pete Buttigieg, a small-city mayor, has spent his time on the campaign trail cementing his status as a top contender. Wednesday night, the mayor was forced to defend his credentials.

Only days after a new Des Moines/CNN/Mediacom Iowa poll showed the South Bend, Indiana mayor holding a significant 10-point lead over his Democratic rivals, Buttigieg faced questions about whether he would meet the moment.

Asked what experience he'd bring to the White House, Buttigieg touted his non-traditional path to his candidacy.

"I have the right experience to take on Donald Trump," he said. "I get that it's not traditional establishment Washington experience, but I would argue we need something very different right now. In order to defeat this president, we need somebody who can go toe to toe who actually comes from the kinds of communities that he's been appealing to."

The mayor also spoke about another distinction he has from the rest of the 2020 field.

"I never thought I'd be on a Forbes magazine list, but they did one of all the candidates by wealth, and I am literally the least wealthy person on this stage," Buttigieg explained.

Sen. Kamala Harris of California was asked about the mayor's missteps and controversy with the black community, and pointed to what she called a "larger issue" that "candidates have taken for granted the constituencies that have been the backbone of the Democratic party."

"My response is I completely agree and I welcome the challenge of connecting with black voters in America who don't yet know me," Buttigieg said in response. The mayor added that his own personal experience as a gay man have prepared him to continue to fight for the rights of others.

"Seeing my rights expanded by a coalition of people like me and people not at all like me, working side by side, shoulder to shoulder, making it possible for me to be standing here, wearing this wedding ring in a way that couldn't have happened two elections ago, lets me know just how deep my obligation is to help those whose rights are on the line every day even if they are nothing like me in their experience," Buttigieg said .

In particular, New Jersey Sen. Cory Booker went right at the former vice president over his comments recently calling marijuana a "gateway drug," a comment which received one of the biggest applause lines of the night.

"I have a lot of respect for the vice president. He...swore me into my office...he's a hero. This week, I hear him literally say that I don't think we should legalize marijuana. I thought you might have been high when you said it," Booker said to laughs and applause. And let me tell you because marijuana, in our country, is already legal for privileged people. ... the war on drugs has been a war on black and brown people."

The former vice president defended his record by stating he thinks the U.S. should decriminalize marijuana, and also boasting about his support among African Americans. "I'm part of that Obama coalition. I come out of a black community in terms of my support," Biden said.

Biden would continue to go on to awkwardly brag about his support, adding that black voters "they know who I am." He added that he was endorsed by the "only African-American woman that had ever been elected to the United States Senate," even while Harris, who is black and Indian American, stood on the stage with him, prompting her to say: "The other one is here."

Biden added, "I said the first."

Democrats pivot away from impeachment

Despite efforts to avoid the topic on the trail, the presidential contenders were confronted from the onset of the debate with Washington's looming impeachment inquiry into President Donald Trump's pressure campaign on Ukraine.

Trump wanted Ukraine President Volodymyr Zelenskiy to announce an investigation that would have, in part, targeted the president's 2020 political rival, former Vice President Joe Biden, and his son, Hunter, who had served on the board of the Ukrainian energy company Burisma.

In the middle of the second week of public hearings, the Democrats remained mostly united on this issue, by both condemning Trump's conduct and reiterating their support for the House Democrats' investigation.

"We have to establish the principle that no one is above the law. We have a constitutional responsibility, and we need to meet it," Warren said.

"I have made it very clear that this is impeachable conduct. And I've called for an impeachment proceeding. I just believe our job as jurors is to look at each count and make a decision," said Sen. Amy Klobuchar, D-Minn., setting herself slightly apart from Warren on the Senate's role in the process. "But let me make very clear that what this impeachment proceeding about is really our democracy at stake."

But as the candidates face mounting urgency to differentiate their primary campaigns in the crucial months before February's early nominating contests -- and shift the focus off the president -- they quickly turned questions on impeachment into an opportunity to offer their own vision for the future of the country after Trump. They weighed in on a day in which Gordon Sondland, U.S. ambassador to the European Union, President Donald Trump's handpicked dealmaker on Ukraine, according to his fellow impeachment witnesses, testified publicly for the first time under subpoena.

"I want to add one more part based on today's testimony, and that is how did Ambassador Sondland get there," Warren continued before diving into her pitch for rooting out the corruption in Washington. "Anyone who wants to give me a big donation, don't ask to be an ambassador because I'm not going to have that happen."

"We cannot simply be consumed by Donald Trump. Because if we are, you know what? We're going to lose the election," Sen. Bernie Sanders, I-Vt., urged. "We can deal with Trump's corruption, but we also have to stand up for the working families of this country."

Klobuchar, relying on her moderate bonafides, finds her footing

Klobuchar came out swinging at Wednesday night's debate, armed with both sharp quips and pointed policy differences, the Minnesota moderate seemed determined to make sure she stood out on the crowded stage tonight with less than two months to go until the Iowa caucuses.

At one point, Klobuchar was asked about questioning whether a woman with Buttigieg's record could make it on the primary debate stage. But instead of taking a shot at the South Bend, Indiana mayor, Klobuchar used the question to make a broader point about the unlevel playing field women face in politics.

"First of all, I've made very clear I think that Pete is qualified to be up on this stage, and I am honored to be standing next to him," the senator said. "But what I said was true. Women are held to a higher standard. Otherwise, we could play a game called name your favorite woman president, which we can't do because it has all been men."

She also made sure to differentiate herself from the other senators on the stage regarding impeachment, particularly from rival Massachusetts Sen. Elizabeth Warren, saying "I just believe our job as jurors is to look at each count and make a decision."

Her answer was a direct contrast to Warren who was asked if she would try and convince her Republican colleagues to vote in favor of impeachment as she has been pushing for. Warren said "of course I will."

Klobuchar also made sure to draw contrast with Warren, who currently leads the Minnesota senator in the polls, by taking what seemed to be subtle jabs at the Massachusetts senator regarding her lofty plans. "I'm not going to go for things just cause they sound good on a bumper sticker and then throw in a free car," the senator said. "I think we have an obligation, we have an obligation, as a party to be, yes, fiscally responsible, yes think big, but make sure we have people's backs and are honest with them about what we can pay for."

The senator also drew applause after offering a savvy line touting her grassroots bonafides by saying: "My first Senate race, I literally called everyone I knew and I set what is still an all-time senate record. I raised $17,000 from ex-boyfriends."

A night of sparse on-stage clashes

After last month's debate, which was filled with tense sparring over kitchen table issues, the November matchup saw relatively few tense exchanges between the Democratic rivals.

Reveling in his outsider status alongside billionaire and activist Tom Steyer, entrepreneur Andrew Yang, when pressed on his credentials for the nation's highest office, first defended Steyer who has been under siege for spending millions of his own money in the race.

"First I just want to stick up for Tom," Yang said. "We have a broken campaign finance system, but Tom has been spending his own money, fighting climate change. You can't knock someone for having money and spending it in the right way. My opinion."

After Buttigieg faced with a question on his credentials for being president, Klobuchar spent the first few seconds of her answer about the double-standard in politics to praise the South Bend mayor.

"First of all, I've made very clear I think that Pete is qualified to be up on this stage, and I am honored to be standing next to him," she said. "But what I said was true. Women are held to a higher standard. Otherwise, we could play a game called name your favorite woman president, which we can't do because it has all been men."

But the night wasn't without its heated moments.

After Rep. Tulsi Gabbard, D-Hawaii, criticized former Secretary of State and Democratic nominee Hillary Clinton as the "personification of the rot that has sickened the Democratic party," the moderators asked aboutHarris,, giving her the opportunity to share grievances from debates ago.

After Gabbard criticized Harris' record as a prosecutor in the second debate, Harris sharply chided Gabbard, responding, "I think that it's unfortunate that we have someone on this stage who is attempting to be the Democratic nominee for president of the United States who during the Obama administration spent four years full time on Fox News criticizing President Obama."