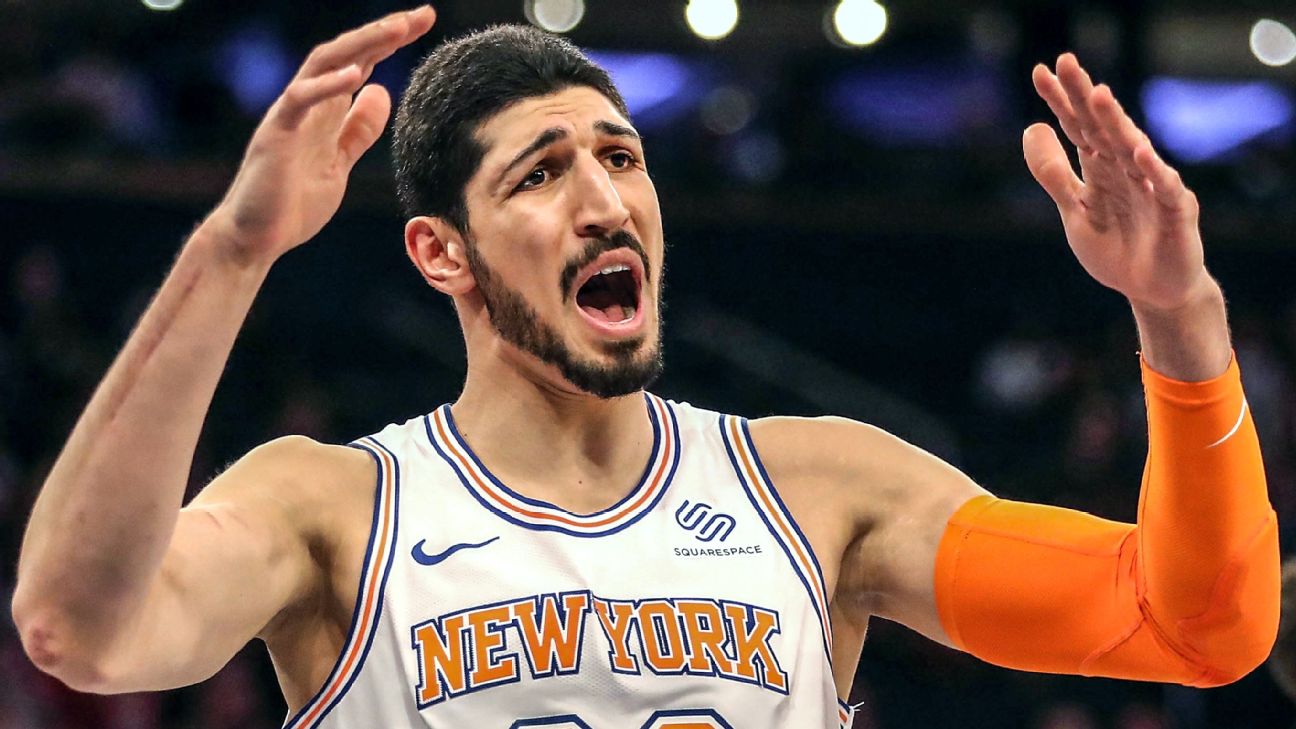 The Knicks had talked to teams about potential trades for the past several weeks, sources said, but Kanter's $18.6 million expiring contract proved too difficult to move at Thursday's deadline.

"From the moment he arrived in New York, Enes passionately embraced our franchise and our city," Knicks general manager Scott Perry said in a statement. "He is a courageous individual and we thank him for his many contributions both on the court and in the community. We wish him the absolute best moving forward, personally and professionally."

Kanter, a vocal critic of Turkey President Recep Tayyip Erdogan and the Turkish government, skipped the Knicks' game in London last month over fears for his safety.

The 26-year-old issued a statement after his release on Twitter, saying he wishes "nothing but the best" for the Knicks.

"Each day I spend in the NBA is a blessing and I look forward to my next adventure," Kanter posted. "... As grateful as I am [to the Knicks], I am also excited to continue playing basketball and showcasing that I can be one of the most dominant forces in the paint. New York will always have a special place in my heart and I look forward to returning here and playing in front of these amazing fans again."

The Boston Celtics are among the teams opposing executives expect to have interest in Kanter.

Matthews,who has an expiring contract, plans to sign with theIndiana Pacers, sources told ESPN. Hewas traded to New York by the Dallas Mavericks as part of the Kristaps Porzingis deal. He averaged 13.1 points in 44 starts for the Mavericks this season, his 10th in the league.

The Houston Rockets were among the playoff teams who had interest in signing Matthews after his buyout, sources said.

The Athletic first reported the planned agreement between Matthews and Indiana.

Kanter, 26, had appeared in just three of the Knicks' past 12 games and had been vocal about his displeasure over his reduced role.

Coach David Fizdale has prioritized playing and developing younger players in recent weeks. Newly acquiredDeAndre Jordan has started ahead of Kanter, and Fizdale said he wanted Jordan to help younger players Luke Kornet and Mitchell Robinson learn how to defend.

Kanter has averaged 14 points and 10.5 rebounds -- tied for 12th in the league -- in just 25.6 minutes per game this season, but he ranked last out of 68 qualified centers in ESPN's defensive real plus-minus metric. He is tied for third in the NBA in offensive rebounding (3.9 per game) since the start of the 2017-18 season.

The Knicks (10-43) acquired Kanter in a 2017 trade that sent Carmelo Anthony to the Oklahoma City Thunder.

New York didn't execute any trades before Thursday's deadline. The Orlando Magic expressed interest in Frank Ntilikina but were told that New York was not trading the second-year guard, sources told ESPN. The club also received interest in recent days for big man Noah Vonleh, sources said. Vonleh, a free agent this summer, is having a strong season (8.6 points, 8.5 rebounds per game) in New York.

The Knicks also decided to keep Jordan, despite suggestions that the veteran would be bought out. The club now has three open roster spots. New York also has roughly $70 million in cap space this summer -- enough for two max contracts.

Woman attempting to go up stairs during power outage dies after oxygen tank runs out
When did you realize COVID changed everything?
US advisers endorse single-shot COVID vaccine from J&J
NJ mom dies of COVID days after giving birth to third son
11 hurt in multi-vehicle accident in Brooklyn
Show More
'Gorilla Glue girl' has message for Black women about 'hair love'
Girl's hearing loss discovered from mask mandate leads to help for boy in Honduras
Teacher steps in after young student cries over zoom because she was hungry
The Countdown: FDA panel endorses 3rd vaccine; House to vote on COVID relief bill
Carranza steps down, Porter to serve as NYC Schools Chancellor
More TOP STORIES News