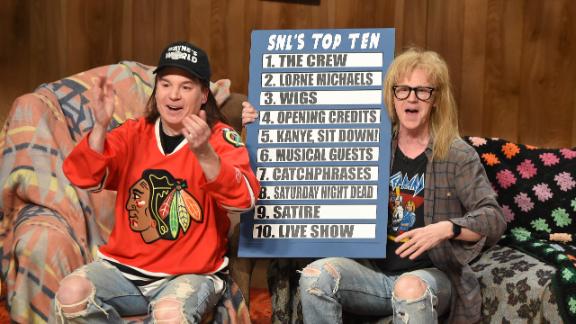 The special, which brought back some of the biggest names in the show's history, garnered a 14.2 household rating on NBC versus a 5.5 rating for the All-Star Game on TNT and TBS, according to the 56 markets monitored by Nielsen.

The rating for the SNL show translated into 23.1 million viewers from 8-11:30 p.m. ET. The program was shown on tape delay for the West Coast, which might have turned into a positive for the NBA.

Turner Sports averaged 7.2 million viewers, but the overnight rating was still up 12 percent versus last year's broadcast, the network said.

This year's NBA All-Star Game overnights still beat out the metered ratings for seven of the previous 10 games.

It was a closer battle on Twitter, where 1.3 million tweets were sent out about the SNL special versus 1.1 million on the NBA All-Star Game, according to Nielsen Social.

The SNL show counts as NBC's most watched prime-time entertainment telecast, in total viewers, since May 13, 2004. That night "ER" had 23.9 million viewers on the night of the "Frasier" finale. That number excludes post-Super Bowl programs.

The West beat the East 163-158 in the highest-scoring NBA All-Star Game.