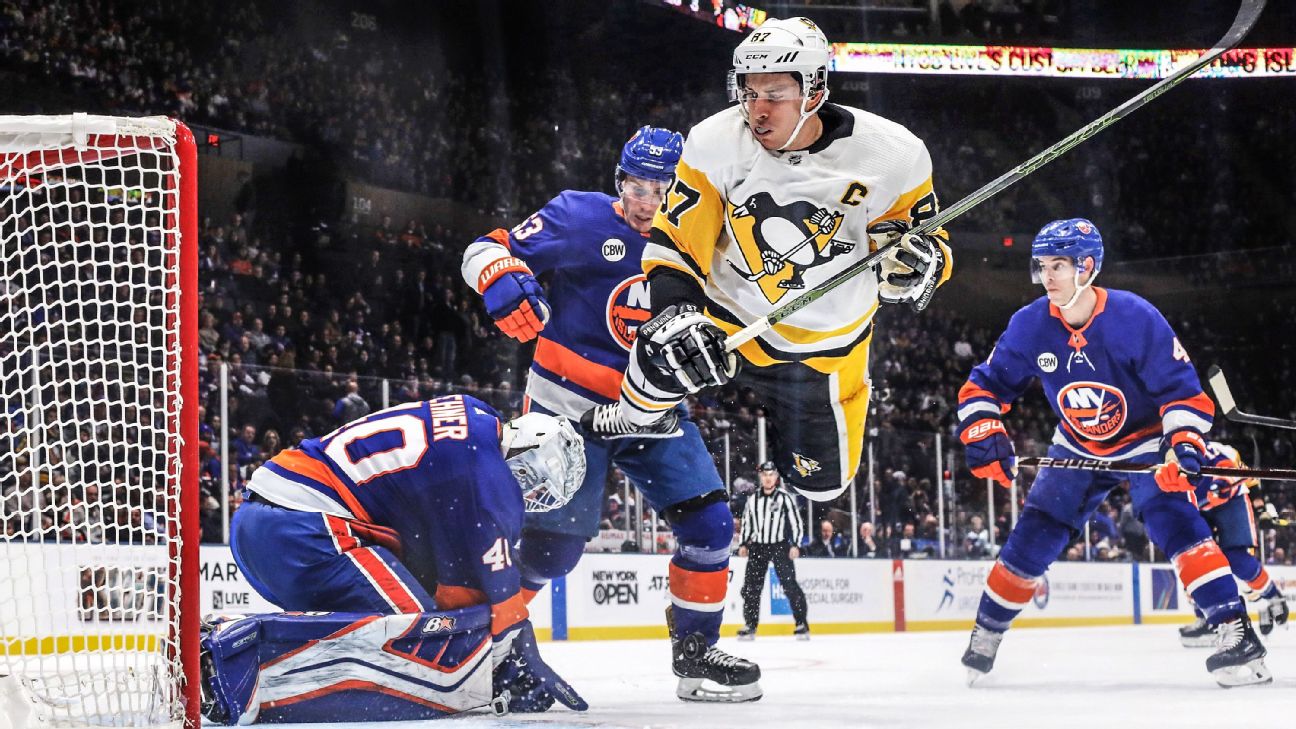 The New York Islanders were one of the NHL's best stories this season. The Pittsburgh Penguins still feature a one-two punch of all-time legends in Sidney Crosby and Evgeni Malkin. Who will this first-round series? Let's break it down:

How they got here: The Isles began 2018-19 with tremendous uncertainty. Not only would it be a nomadic season -- commuting between Brooklyn and Long Island as they await a more permanent home -- but the team also needed to navigate without its former captain, John Tavares, who left in free agency. New GM Lou Lamoriello dubiously signed a handful of fourth-liners in free agency and gave the reins to Barry Trotz, who felt jilted after he won a Stanley Cup in Washington but did not receive the rich contract he felt he deserved.

The result? The Islanders were a pure delight. New York went from one of the league's most porous defenses to the most responsible. The goaltending was terrific. The Islanders proved everyone wrong, and now they have home ice for a series for the first time since 1988.

The Penguins have felt like a work in progress all season. GM Jim Rutherford made several midlevel tweaks -- whether it was the early season swap of Marcus Pettersson for Carl Hagelinor adding Jared McCann and Nick Bjugstad, two forwards for the future -- to get this team in the right direction. The top line has clicked consistently; not only did Sidney Crosby have a great season, but Jake Guentzelalso scored 40 goals, with very little fanfare. The Penguins once again boast a roster with a ton of playoff experience, and they once again look like a team that waited to peak at the right time for a long playoff run.

First line: Offense hasn't been easy for the Islanders. In his first season as the Isles' top center, Mathew Barzal notched only 62 points, down from 85 in his sensational rookie season. Captain Anders Lee was the closest New York player to 30 goals; he had 28. Sidney Crosby might be having one of his most complete seasons as a pro and probably should be in the Hart Trophy conversation. Jake Guentzel quietly reached 40 goals. Advantage: Pittsburgh

Depth: The Islanders' strength comes from their balance and ability to roll four lines evenly. The defensive structure is sound in the bottom nine, but there aren't too many players who can score consistently. On the Pens' second line, Evgeni Malkin and Phil Kessel didn't have their best or most consistent seasons, but they are both big-time threats this time of year. The Penguins' addition of Bjugstad and McCann are strong, but the fourth line isn't scaring anybody. Advantage: tie

Defense: New York doesn't have a true shutdown top pairing, but it doesn't have any glaring weaknesses either. Playing time is pretty even for all six blueliners, from 35-year-old Johnny Boychuk to 24-year-old Devon Toews, who leveled up this season under Trotz. Kris Letang had a bounce-back season for the Penguins, and as long as he's healthy, he will be a force in the postseason. Overall, Pittsburgh's blue line has been jumbled this season and is not a true area of strength. Advantage: New York

Goaltending: Something hasn't been right with Matt Murraydating to early last season. He has shown flashes of the goaltender he can be -- and management had so much faith in him that they felt comfortable parting ways with Marc-Andre Fleury -- but overall he was just decent, with a .919 save percentage and 2.69 goals-against average. New York's goaltending has been a revelation this season. Robin Lehner (.934 even-strength save percentage) and Thomas Greiss (.937) combined for a league-high 11 shutouts and took the William M. Jennings Trophy. Advantage: New York

Coaching: The two most recent coaches to win a Stanley Cup face off. Barry Trotz has been cause célbre in the NHL after taking over this hodge-podge group and -- while extracting revenge on his old employer -- whipping them into one of the league's top teams. Mike Sullivan, as usual, had to jumble some lines and manage injuries. He knows how to get a team ready for a long playoff run.Advantage: tie

Health: The Penguins have had a hard time staying healthy this season, especially on the blue line. Kris Letang is back, but Brian Dumoulin is now out (but skating again). The Penguins hope to have depth forward Zach Aston-Reese back soon. The Islanders lost Andrew Ladd on March 24 with a torn ACL but have had to manage only minor injuries since then. Advantage: New York