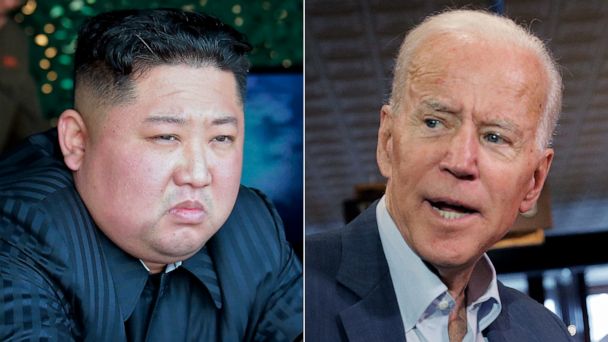 North Korea issued a list of criticisms against former Vice President Joe Biden, calling the presidential candidate "a low IQ idiot" and saying his "candidacy should not carry high expectations."

Additionally, the North Koreans referred to Biden as someone "who likes to stick his nose into other people's business and is a poor excuse for a politician." The published commentary also said he "is misbehaving."

On Wednesday, Biden's campaign responded saying "it's no surprise North Korea would prefer that Donald Trump remain in the White House."

"As Vice President Biden said in Philadelphia, Donald Trump 'embraces dictators and tyrants like Putin and Kim Jung Un' while alienating our closest allies. That is antithetical to who we are and it has to change," Biden campaign spokesperson Andrew Bates told ABC News. "Trump has also been repeatedly tricked into making major concessions to the murderous regime in Pyongyang while getting nothing in return. Given Vice President Biden's record of standing up for American values and interests, it's no surprise that North Korea would prefer that Donald Trump remain in the White House."

The back-and-forth comes after Biden, while out on the campaign trail, recently criticized North Korean leader Kim Jong Un.

In an opinion piece dated Tuesday, posted on the website of KCNA - the North Korean news agency - and translated by ABC News, said Biden "dared to blaspheme our Supreme Dignity at a recent campaign event."

The piece also declared that Biden's "blasphemy" doesn't "even meet the standards of basic human dignity, let alone a politician."

It's unclear if the KCNA piece was in direct response to Biden's remarks on the campaign trail, but at a rally in Philadelphia on Saturday, Biden attacked President Donald Trump for his relationship with "dictators and tyrants like [Russian President Vladimir] Putin and Kim Jong Un."

While campaigning last week in New Hampshire, Biden spoke further about the North Korean leader: "This is a guy with his uncle's brains blown out, sitting across a table. This is the guy who's a thug."

Under Kim's leadership, several top officials and some of his family members have been executed. Kim's uncle was executed in 2013, according to KCNA, after he was arrested for corruption, acts of treachery and womanizing. And at least one high-ranking defense chief may have been executed with anti-aircraft machine guns.

The North Koreans calling Biden a person with a "low IQ" might sound familiar. In fact, it's a phrase Trump regularly uses against his critics. On March 18, 2019, the president attacked Biden on Twitter, calling him "another low I.Q. individual!"

Joe Biden got tongue tied over the weekend when he was unable to properly deliver a very simple line about his decision to run for President. Get used to it, another low I.Q. individual!

Biden responded Tuesday to the president's attack in a fundraising email.

"I've never forgotten where I came from. My family did have to leave Pennsylvania when I was 10 -- we moved to Delaware where my Dad found a job that could provide for our family," the fundraising email said.

In the opinion piece, North Korea also criticized Biden for being accused by several women of making them uncomfortable with what they considered inappropriate touching. Biden told ABC's "The View" that he's "more cognizant" of private space since the allegations were made.

Additionally, KCNA mocked him for falling asleep during a budget speech former President Barack Obama made in April 2011.

KCNA also hit Biden for withdrawing from the 1988 presidential campaign after reports of plagiarism arose. Biden used elements of a speech by a British politician as his own, without attribution. In an interview with ABC News in 2007, Biden described the scandal as "Stupid. My mistake. Born out of ignorance, thinking I didn't have to prepare."

"Biden should remember, as someone who failed in a presidential run twice, that he should be careful with his words, and that should be a basic quality of a presidential candidate," according to KCNA, which also warned it "will not forgive anyone who offends the dignity of our Supreme Leader and we will keep score to the very end."