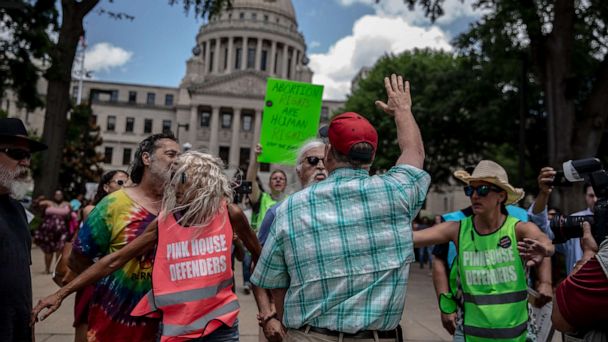 A federal court in Mississippi on Friday temporarily blocked the state's new "fetal heartbeat" law that bans abortion after roughly six weeks of pregnancy. The law was set to take effect July 1.

Mississippi is one of ten states to push through a law restricting access to abortion in 2019, though all of those laws have faced lawsuits that challenge their constitutionality and none of them are in effect. Georgia, Ohio and Kentucky have passed bans similar to Mississippi's, and earlier on Friday, Missouri's governor signed a new eight-week ban. Alabama passed a law that would criminalize abortion for doctors who perform them, while Utah and Arkansas have pushed through legislation that would ban the most common form of second-trimester abortions.

The judge went on to say that Mississippi's law, which was passed in March, "prevents a woman's free choice, which is central to personal dignity and autonomy."

The case was filed by the Center for Reproductive Rights and the Mississippi Center for Justice on behalf of Jackson Women's Health Organization, which is the last remaining abortion clinic in the state.

"Unfortunately, the legislature and the Governor think they should make these decisions for women instead of letting women make their own decisions about childbirth," Rob McDuff of the Mississippi Center for Justice said in a statement. "Fortunately, the federal court has once again stepped in to block this egregious governmental intrusion on the private lives of Mississippi's women."

Shannon Brewer, the clinic's director, noted that most of the patients who seek abortions are past the six-week mark.

A representative of Governor Phil Bryant could not immediately be reached for comment.

But when he signed the bill in March, Bryant said he would not be deterred by the threat of lawsuits.

"If they do not believe in the sanctity of life, these that are in organizations like Planned Parenthood, we will have to fight that fight," he said, according to the Associated Press. "But it is worth it."

In late 2018, the same judge struck down another Mississippi law, which barred women from getting abortions 15 weeks into their pregnancy. In his decision on Friday, he noted that the state had responded to that decision "by passing an even more restrictive bill."

President Trump's appointment of Brett Kavanaugh and Neil Gorsuch to the U.S. Supreme Court has given the court a conservative majority, and abortion foes see a historic opportunity to overturn or at least chip away at Roe v. Wade, the 1973 ruling that legalized abortion.

Nancy Northup, president and CEO of the Center for Reproductive Rights, said in a statement that the group intends to "block them at every turn."

"The Constitution protects a woman's right to make decisions over her body and her life," she said. "The district court's decision today was a resounding affirmation of this settled law."
Report a correction or typo
Related topics:
abc newsnational
Copyright © 2020 ABC News Internet Ventures.
More Videos
From CNN Newsource affiliates
TOP STORIES