'Hey, where's your mustache and glasses?': Bobby V on the 20th anniversary of his dugout disguise

ESPN
By Bobby Valentine, as told to William Weinbaum 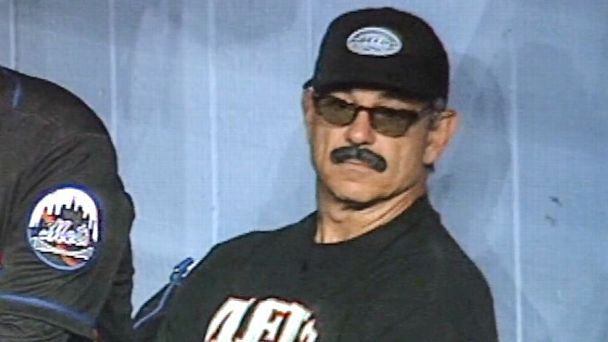 It's one of the oddest, most memorable moments in the colorful 57-year history of the New York Mets.

On the night of June 9, 1999, beleaguered manager Bobby Valentine was ejected in the 12th inning of an eventual 14-inning win.He went to the clubhouse but came back down the runway to the dugout in a disguise of sunglasses and a fake mustache made of eye black.

Valentine, now the executive director of athletics at Sacred Heart University in Connecticut, recently shared his recollections with William Weinbaum for an E:60 "Tell Me a Story" segment on the 20th anniversary of that singular Shea Stadium episode.

Those were stressful times. Three of my coaches had just been fired a few days before, and at the press conference, I predicted that we'd go 40-15 in the next 55 games. I said if we didn't do that, I would quit as the New York Mets' manager.

This was in that string of games that meant so much to my life and my career.

It was extra innings against the Toronto Blue Jays, a 3-3 game. Shannon Stewart, a real fast runner, is on first base, and I decided to call a pitchout.

Mike Piazza is my catcher. He stepped out for the pitchout, caught the ball and threw it to second. Randy Marsh, the umpire behind home plate, was calling the play off. The reason? A "catcher's balk." [Catcher's interference, officially, giving the batter first base and Stewart second base.]

Now, I have read the rulebook for all my life, but I had never seen nor heard that play being enforced in a game, so I came out to talk with Randy. I asked him if I could get thrown out for what I was thinking and he said no. Then I told him what I was thinking and he threw me out. Well, I went up into the clubhouse and two of my favorites, Orel Hershiser and Robin Ventura, asked me what the heck I was doing up in the clubhouse when I was needed down in the dugout. I said, "I can't go down there."

Robin threw me a hat, Orel threw me some sunglasses and said, "Just put these things on, take off your uniform and go down to the dugout." And I said, "Guys, it's a night game. I can't wear sunglasses down in the dugout."

They said, "Do it!" So I walk in the training room to look in the mirror, pulled the hat down a little and then looked down and saw the stickers that you put under your eyes on a day game. And I took one sticker and put it here [to form the right half of a "mustache"], took another sticker and put it there [for the left side of the 'stache]. I looked at them and they said no one will ever know. I went down to the dugout, and Orel was supposed to be standing on the top step, shielding me from the umpires and the other team.

What we didn't realize was that the third-base camera up in the second deck had the view of me in the dugout. The announcers saw me.

Luckily, we won the game almost immediately, so there wasn't a long time that I was there, when I came out on the field and slapped everyone five.

The umpires laughed, but I was fined $5,000 and [received] a two-game suspension -- we won both of those games.

I really didn't think there would be repercussions. I thought that it was a normal thing, guys would relax a little more. I didn't expect to be out there long, and I don't think I was.

I think people think that I'm kind of kinder and gentler, the guy who doesn't mind levity and doesn't mind going into the clubhouse and coming out with this disguise so that the guys can smile and feel a little better about themselves. At least, I hope that's what they think.

It was made a big thing because things were kind of big at that time. I was supposed to be fired.

I think I did a lot of things in my life that were kind of important, but probably the one line that I get asked the most is, "Hey, where's your mustache and glasses?" And that's every other day.

It's the only thing that has transcended me from generation to generation. I've seen it a hundred times and I always say, "Orel, why didn't you block out that camera? You owe me five grand." The backstory is we went 40 and 15 -- and you can look that up.

Valentine's Mets had lost eight games in a row and were 27-28 when three of his coaches were fired in June. But they finished in second place in the National League East and won the wild card in a tiebreaker playoff for a 97-66 season record.

Valentine says the nearly 4-year-old son of pitcher Pat Mahomes was also in the clubhouse the night Valentine donned his disguise. But when ESPN recently asked the son -- better known as NFL MVP/Kansas City Chiefs quarterback Patrick Mahomes -- he said he was very young then and doesn't remember. 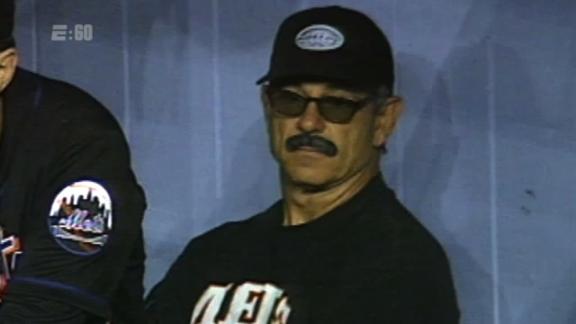 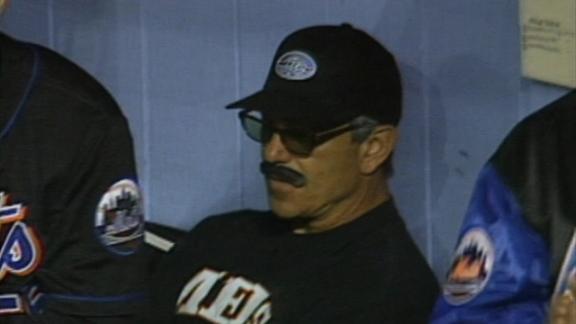