'Not at all' worried about perjury Donald Trump Jr. says after Senate panel questions 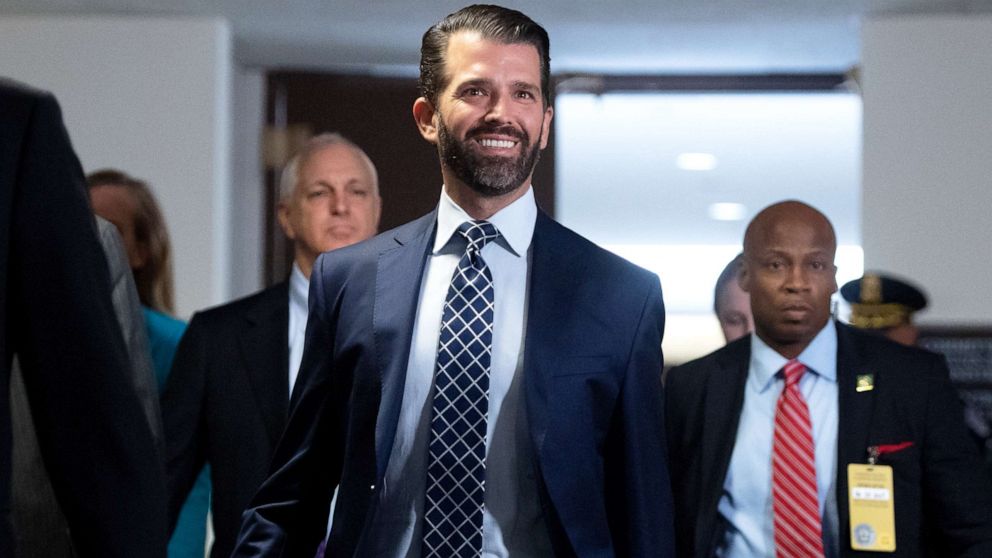 Donald Trump Jr., the president's eldest son, emerged from a second round of follow-up questions by the Senate Intelligence Committee on Wednesday saying "there was nothing to change" and that he's not worried about possible perjury.

After nearly three hours behind closed doors, Trump Jr. stopped briefly on his way out to tell reporters that he's glad the matter is "finally over."

He said there was nothing to correct from when he last spoke to senators and questions raised about his account after special counsel Robert Mueller's report was released.

He indicated the questions dealt with apparent discrepancies between what he claimed to know about a proposed Trump Tower Moscow project during his father's presidential campaign and the account given by the president's former longtime personal lawyer and fixer, Michael Cohen.

"The reality is that there was nothing to change," Trump Jr. said. "If there needed to be clarification because Michael Cohen - who lets not forget is serving time right now for lying to these very investigative bodies -- I'm happy to do that," he said.

"I don't think I changed anything of what I said because there's nothing to change," Trump Jr. said.

"I'm glad this is finally over," he added. "We were able to put final clarity on that and I think the committee understands that."

Asked whether he was "worried about perjury," he replied, "Not at all."

In May, Trump Jr. agreed to appear before the panel for a closed session, limited in scope and time after the Republican-led committee issued a subpoena for his testimony.

Wednesday's hearing marked the fourth time lawmakers have summoned Trump Jr. to the Hill since his father took office and the second time he's sat before the Senate Intelligence Committee, with whom he met for more than nine hours in December 2017.

In the wake of special counsel Robert Mueller's now-closed investigation, several congressional panels are marching forward with their own probes into Russian meddling during the 2016 campaign.

While the exact nature of the Senate Intelligence Committee's request for Trump Jr.'s testimony remained unknown, the decision by its Republican chairman, Sen. Richard Burr, to subpoena the president's son was met with sharp criticism from conservatives in the upper chamber.

Last month, Sen. Lindsey Graham, R-S.C., went so far as to suggest that Trump Jr. ought to ignore the subpoena.

"If I were his lawyer, I wouldn't put him back into this circus. The freak show in the House -- I'm not going to let it come to the Senate," Graham told ABC News in May. "We gave Mueller two years and [35] million dollars -- it's over for me."

A source close to Trump Jr. said last month that he is "incredibly appreciative to the members that went to bat for him and he will return the favor come the 2020 campaign."

Responding to reports of the subpoena last month, President Donald Trump said he was "surprised" by the move.