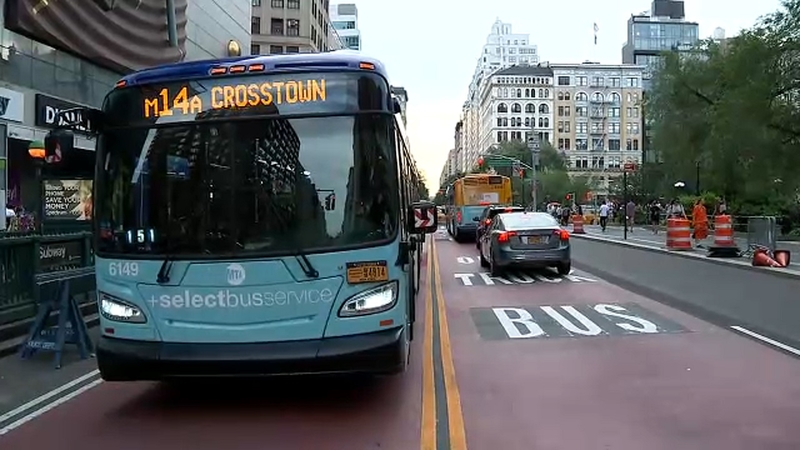 UNION SQUARE, Manhattan (WABC) -- A plan scheduled to start on Monday to make most of 14th Street a bus route is now on hold.

A judge ruled in favor of opponents of the plan, who said it would only make a bad situation worse.

In the 'busway plan,' cars would be banned on 14th Street from 3rd to 9th Avenues. It was a way to clear the road for buses - to replace the L train, when it was slated to shut down.

Despite the fact that the L Train shutdown has been averted, the city still wants to move forward with the busway plan - the reason now is to speed up buses.

Schwartz is a resident, and the attorney representing neighbors suing the city to but the brakes on this plan - which was set to go into effect Monday.

The changes would have restricted 14th Street to buses and trucks only - seven days a week from 6 a.m. to 10 p.m. Residents argued it would flood the secondary streets with mind-numbing traffic.

Meanwhile, the city went ahead with part of the initial L Train plan and installed protected bike lanes on 12th and 13th Streets.

Residents argue that the narrower roadways will only add to the congestion.

"We don't think it's a good tradeoff for cars to come down our streets and spew pollution in our windows that we have to breathe in," added Schwartz.

The MTA is moving forward next week with Select Bus Service along 14th Street.

"Today's disappointing ruling will affect tens of thousands of M14 bus riders each day... the ruling means that for the first time ever, SBS will operate without the trademarked dedicated lanes that have dramatically increased bus speeds."

Both sides are due back in court in August.