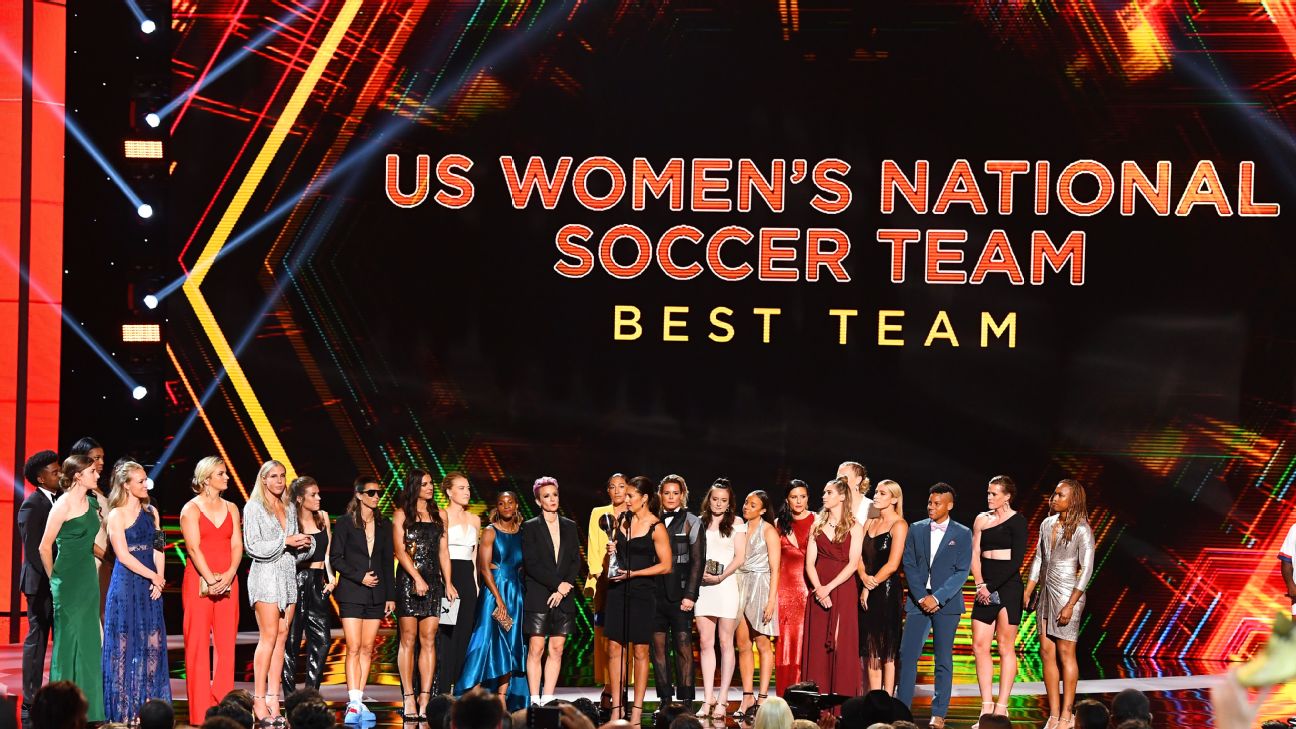 The U.S. women's national soccer team's day started with a parade through New York City's Canyon of Heroes, included a flight to Los Angeles and then saw Alex Morgan and the USWNT shine as the big winners at The ESPYS on Wednesday at the Microsoft Theater in Los Angeles.

The two ESPYS wins were the latest reasons for the USWNT to celebrate after it captured its second consecutive World Cup title by beating the Netherlands 2-0 on Sunday.

Morgan joked that her ESPY for best female athlete was the second-best trophy she earned this week.

"I think about the greats that have won this award in the past, and I'm just so honored to follow in their amazing footsteps," Morgan said in her acceptance speech. "They not only won championships and countless records but were an inspiration to so many, including me, as I dreamed of playing the sport that I love. As athletes we try to surround ourselves with the best people to help lift us up and to help make this journey possible, and I'm so fortunate to have that in my life."

Morgan set the tone for the World Cup champions when she scored five goals in the team's tournament-opening 13-0 victory over Thailand.

She shook off critics who claimed she and her teammates celebrated goals excessively and continued celebrating all the way to the championship.

In addition to its dominant play on the field, the USWNT's advocacy for the LGBTQ community and pay equity off the field has also drawn plenty of acclaim.

Oscar-winning actress Sandra Bullock, who announced the Best Team winner on Wednesday, said upon presenting the award to the USWNT: "All those in favor of equal pay, say aye." ESPYS host Tracy Morgan added as he signed off for the night: "Let's pay these ladies, and let's fight cancer."

Wednesday's awards show marked the 27th edition of The ESPYS. The V Foundation for Cancer Research has been synonymous with the show since the late Jim Valvano announced its beginning during a memorable speech at the 1993 ceremony.

It was announced Wednesday that the V Foundation has raised more than $100 million for cancer research since its inception.

Last month, the 24-year-old Antetokounmpo became the third-youngest player to win NBA MVP in the past 40 seasons, behind Derrick Rose and LeBron James.

Antetokounmpo was emotional when he accepted the MVP award but said upon receiving the ESPY: "Just letting you guys know I'm not going to cry today."

He then added: "As a kid, I never thought I was going to win the ESPYS, so this is all about hard work, and when you believe in your dreams, things like this can happen."

Antetokounmpo averaged 27.7 points, 12.5 rebounds and 5.9 assists per game during the regular season as the Bucks finished an NBA-best 60-22. He was voted a 2019 All-Star team captain alongside James. He became the first player to average 25 points and 10 rebounds per game on a team with the league's best record since Shaquille O'Neal did so as a member of the Los Angeles Lakers in 1999-2000.

Saquon Barkley, who finished second in the NFL with 1,307 rushing yards as a rookie with the New York Giants, earned the ESPY for best breakthrough athlete.

The Milwaukee Brewers' Christian Yelich, the Atlanta Hawks' Trae Young and tennis player Naomi Osaka, the reigning women's singles champion at the US Open and the Australian Open, were the other nominees.

Barkley had a team-high 91 receptions -- an NFL record for a rookie running back -- for 721 yards, and his 2,028 yards from scrimmage led the league.

He was the third rookie in NFL history to have 2,000 scrimmage yards, joining Eric Dickerson in 1983 and Edgerrin James in 1999.

His six rushes of 50-plus yards this season were the most by a Giants player in a season since the NFL-AFL merger in 1970, according to Elias Sports Bureau research.

He won the award over Oregon's Sabrina Ionescu, who became women's basketball's all-time leader in triple-doubles; Golden State's Klay Thompson, who set the record for 3-pointers in an NBA game with 14; and Matthew Boling, who set the high school track record in the 100 meters.

Brees broke Peyton Manning's record of 71,940 career passing yards with a 62-yard touchdown pass to receiver Tre'Quan Smith in the second quarter of a 43-19 victory over the Washington Redskins in October.

The game was one of the best performances of his 18-year career, as Brees completed 26 of 29 passes for 363 yards and 3 touchdowns. His completion percentage of 89.7 was a career best.

Brees is the unlikeliest of all-time great quarterbacks. Just 6 feet tall and barely recruited out of high school, he fell to the San Diego Chargers in the second round of the NFL draft out of Purdue in 2001 and was doubted by most of the league when he became a free agent after a career-threatening shoulder injury in 2005. Brees, 40, finished last season with 74,437 passing yards.

The Los Angeles Rams' 54-51 victory over the Kansas City Chiefs on Monday Night Football in November won the ESPY for best game.

With 105 total points, it marked the first time an NFL game had more than 100 points with 50 from each team. The game also totaled 14 touchdowns, including three by defensive players, and 56 first downs.

The Texas A&M football team's 74-72 victory over LSU in seven overtimes and the Notre Dame women's basketball team's 81-76 upset of UConn in the Final Four were the other nominees.

Ohashi, 22, electrified the crowd -- and the judges -- at the 2019 Collegiate Challenge with her routine, which amassed nearly 100 million views on YouTube.

"Overnight fame from one in a million. Over 100 million views. I started seeing myself in the news," the UCLA star said in her acceptance speech. "Trying to infuse a little bit of joy into the world in my sport. After all the abuse and misuse of people in higher power. It's no wonder why our voices went silent as theirs would just tower. But today, mine no longer cowers."

Former U.S. Marine Corps Sgt. Kirstie Ennis, an athlete for most her life before suffering severe injuries in a helicopter crash while on active duty in Afghanistan, received the Pat Tillman Award for Service.

Ennis, who has undergone more than three dozen surgeries, including the amputation of her left leg above the knee, after suffering facial trauma, a traumatic brain injury, cervical and lumbar spine trauma, and bilateral shoulder damage in the 2012 crash, turned to sports during her recovery. She has won three gold medals in swimming at the Warrior Games, but competitions are only part of her story.

She has also walked 1,000 miles across Britain and has reached the top of Mount Kilimanjaro, Carstensz, Mount Elbrus and Aconcagua in her attempt to become the first female above-the-knee amputee to summit all seven of the world's highest peaks.

"I started my mission because I didn't have the role model I needed or wanted while I was in the hospital," Ennis said in her acceptance speech. "Now when I don't have the fight within to put one foot in front of the other, I remind myself of the people who may be watching. The young ones who need a pillar of hope, the men and women who may need inspiration to keep going and the nonbelievers waiting for me to prove them wrong. I'm one of the lucky ones who came home. Broken, but I'm still here, and I still can. So I will continue every day for those who can't."

The award is named after former NFL linebacker and U.S. Army Ranger Pat Tillman, who died during active service in Afghanistan after he enlisted in the military following the Sept. 11, 2001, terrorist attacks.

High school football coach Rob Mendez, who was born with tetra-amelia syndrome, a rare disorder that caused him to be born without arms or legs, was the recipient of the Jimmy V Award for Perseverance.

Mendez, who developed a passion for football at an early age and taught himself the fundamentals of football using the Madden video games, spent 12 years as an assistant coach for various programs.

In 2018, he was hired as a head coach for the junior varsity football team at Prospect High School in Saratoga, California. In his first season, he led his team to an 8-2 record and narrowly lost the league championship game 3-0.

"It's honestly been hard for me to fathom receiving this award, being recognized alongside heroes of mine like Coach Valvano, Stuart Scott, Jim Kelly and so many others," Mendez said in his acceptance speech. "But the reality is that I am here. And if there's any message that I want to give to you tonight, it's to look at me and see how much passion I put into coaching and how far it's gotten me. When you dedicate yourself to something and open your mind to different possibilities and focus on what you can do instead of what you can't do, you really can go places in this world."

Former Los Angeles Lakers star Kobe Bryant presented Russell with the award, which is given annually to someone who embodies the spirit of its namesake, tennis legend and longtime human rights campaigner Arthur Ashe.

In addition to being an 11-time NBA champion, the 85-year-old Russell has been a leader in the civil rights movement.

"Every generation has a responsibility to teach the next," Bryant said while presenting the award. "One thing I learned about Bill was how he drew inspiration from his grandfather, whose motto was, 'A man has to draw a line within himself, that he will not allow any man to cross.' Bill learned from that and added his own motto: 'You disrespect the line, you disrespect me.' More than 50 years later, Bill and his grandfather's mottos still resonate powerfully and still speak loudly for Bill's beliefs."

Boston Mayor Marty Walsh tweeted in honor of Russell on Wednesday, posting a photo of City Hall, which he said had been "lit green to honor one of Boston's greats."

Among the other notable winners announced Wednesday night: 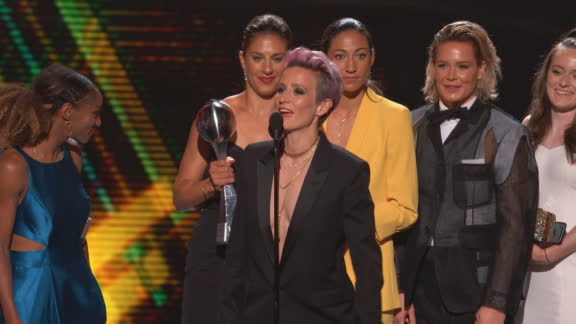 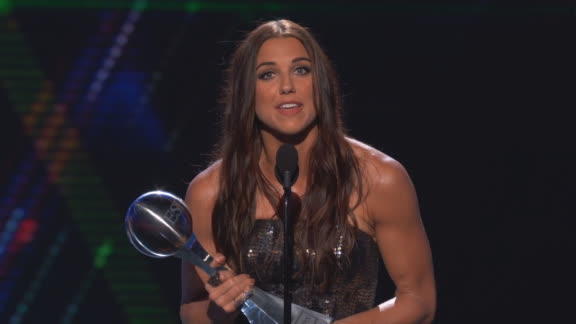 Morgan: Women are 'more than just athletes'
In her acceptance speech for Best Female Athlete, Alex Morgan sends a message about teamwork and advocates for the rights of female athletes. 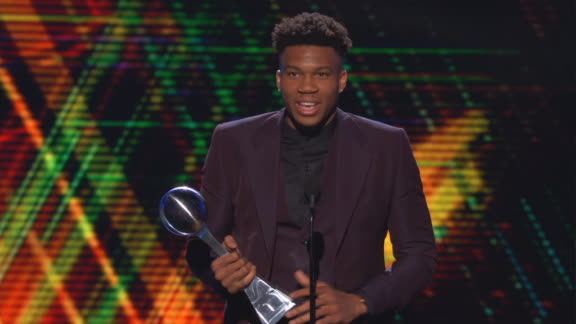 Giannis humbled after winning Best Male Athlete
Giannis Antetokounmpo accepts the award for Best Male Athlete, and thanks God, his family and his teammates for getting him to where he is today. 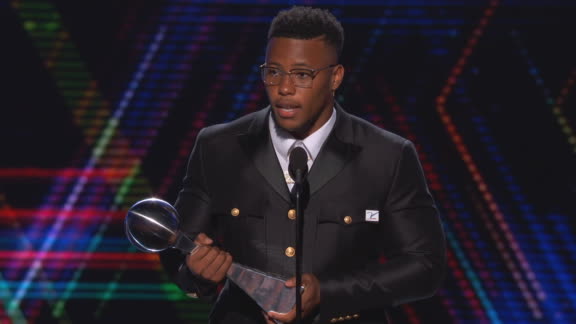 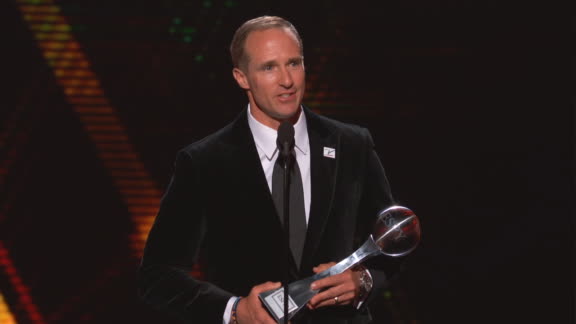 Drew Brees thanks USWNT, sends message about playing sports
In his acceptance speech for Best Record-Breaking Performance, Drew Brees commends the U.S. women's national team on its commitment to the game of soccer and sends the crowd a message about what can be learned from playing sports. 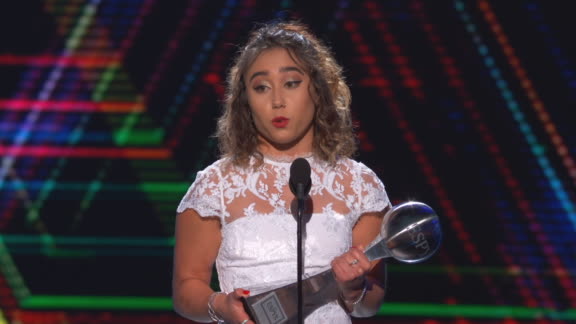 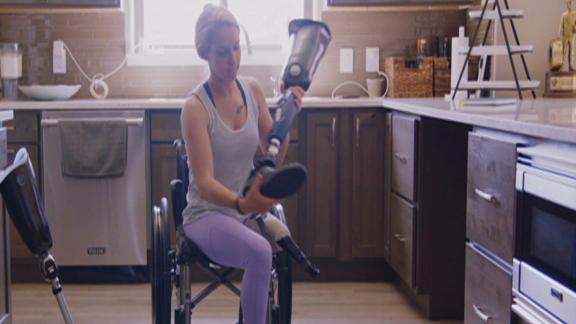 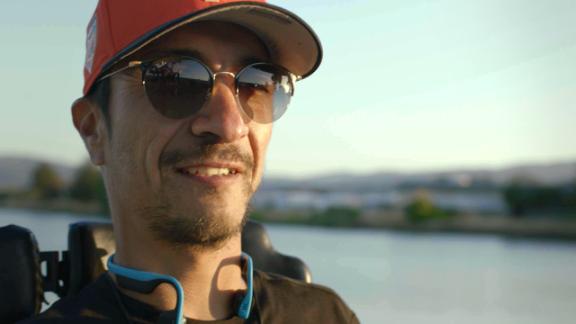 Mendez has never accepted failure as the end of his story
2019 Jimmy V Award recipient Rob Mendez, who was born without arms and legs, always persevered and never gave up on his dream of being a head football coach. 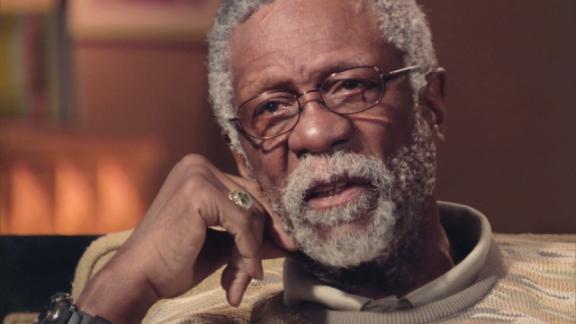