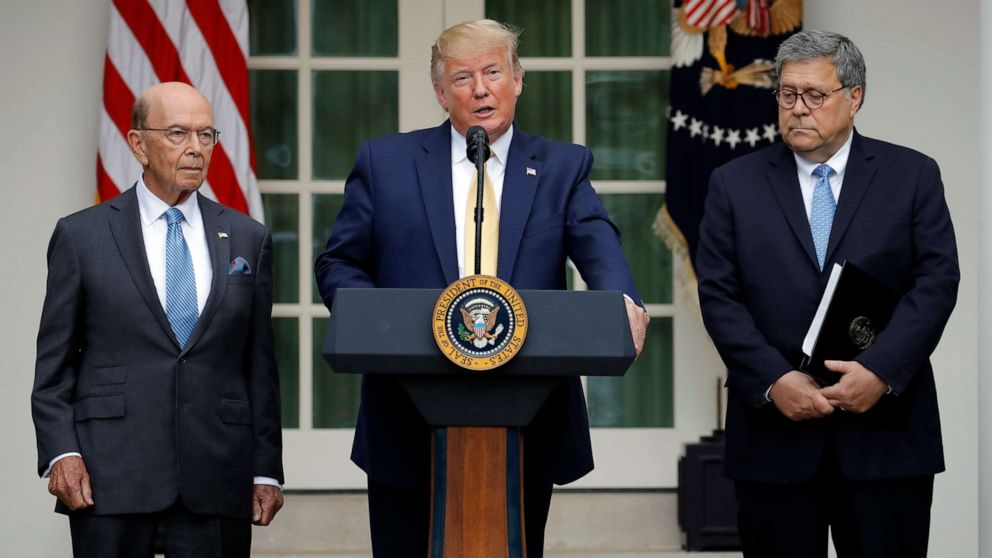 President Donald Trump has abandoned plans to add a citizenship question to the 2020 census, saying he'll instead use existing government data to estimate the number of citizens and non-citizens in the U.S.

The Supreme Court recently blocked the question from being added to the census and challenged the Trump administration's motives.

"The president," Karl tells us, "basically totally capitulated on this and gave up the court fight."

Immigration officials are reportedly preparing to arrest and deport thousands of migrant families in sweeping raids this weekend, three weeks after the president said he delayed the roundups to give Democrats time to make changes to asylum law.

There are 2,000 people in as many as 10 cities who have been targeted as a top priority by Immigration and Customs Enforcement, according to Trump administration officials. ICE has declined to comment on the timing of any raids.

Immigration advocates, according to ABC News' Serena Marshall, are alerting migrants not to open their doors to ICE agents unless they are shown a warrant signed by a judge, which could hinder the agency's efforts in addition to a general lack of resources.

"Already ICE is over capacity by 8,000 individuals who are being detained, so it's not even a question of how it'll be operational now that everyone knows that it's happening, but also where they're going to put people," Marshall adds.

Amazon said it's planning to spend $700 million to re-train, or "upskill," one-third of its U.S. workforce as automation and productivity grow.

The new training will include IT, robotics, cloud computing and machine learning, with an aim to help employees "move into more highly skilled roles within or outside of Amazon," the company announced.

As politicians and Democratic presidential hopefuls have criticized the e-commerce giant, Amazon's announcement could be seen as an effort to change public perception, in addition to a recent $15 minimum wage increase, ABC News Chief Business and Economics Correspondent Rebecca Jarvis says on "Start Here."

"These are fixes that are a lot less expensive than the other potential [changes], which would be the breakup of these major companies, if we go down that road, especially in the 2020 conversation," Jarvis says.

The hip-hop world is calling for rapper A$AP Rocky's release from a Swedish prison following conflicting reports about a June 30 street fight.

The rapper is "suspected of aggravated assault," according to a press release from the Stockholm prosecutor's office translated by ABC News, but A$AP Rocky's manager wrote in an Instagram post that the rapper was acting in "self-defense" after he, his bodyguard and two other performers "were harassed and physically assaulted by a group of men in the area."

A$AP Rocky also shared his side of the story on Instagram with video posts that appear to show him and his companions being followed by two men. He wrote in the caption, "We don't know these guys and we didn't want trouble. They followed us for four blocks."

Hollywood stars like Justin Bieber, 2 Chainz, Tyga and more have voiced their support for A$AP Rocky and shared a Change.org petition calling on Swedish officials to release the rapper.

A State Department official confirmed to ABC News on Thursday that officials are "aware of the arrest of a U.S. citizen in Stockholm" without naming A$AP Rocky.

'A free press is the only effectual guardian of every other right': Amal Clooney, a renowned human rights attorney who married a movie star, criticizes the president of the United States of America for vilifying journalists.

'The earth is angry': Miley Cyrus explains to ELLE magazine why she doesn't want kids.

The Rockets' Russell Westbrook trade presents more questions than answers: Many will likely struggle to understand this deal for Houston. But let's not make this more complicated than it is: Rockets general manager Daryl Morey has always prioritized star talent over just about everything else. And Westbrook has that, even if he might make for a questionable fit.

Two scientists are in the process of testing a theory tied to forecasting shark attacks.

"Once the tag is in it, what we'll do is get a sense of what drives the behavior of these sharks," Skomal said. "Certainly, it could be weather conditions, it could be water temperature -- we're testing all these various factors to see if there are patterns."