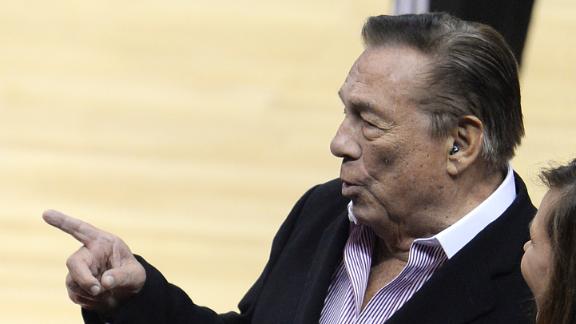 Donald Sterling, the disgraced and banned owner of the Los Angeles Clippers, asked for forgiveness in his first sit-down interview since audio recordings of him making racist comments surfaced last month.

"I'm not a racist," Sterling told CNN's Anderson Cooper in an interview that will air Monday. "I made a terrible mistake. I'm here to apologize."

Sterling, who took over ownership of the Clippers in 1981, is the longest-tenured owner in the NBA, but he has been banned for life and fined $2.5 million by commissioner Adam Silver and may be forced to relinquish ownership of the franchise.

Sterling's ability to remain owner of the Clippers rests in the hands of the NBA's other 29 owners, who are expected to vote on the matter. A 75 percent majority is needed to oust Sterling. In the interim, the league has made Dick Parsons the CEO of the franchise.

"If the owners feel I have another chance, then they'll give it to me," Sterling said.

When asked by Cooper why he waited until now to make his first public comments, Sterling said he's been "emotionally distraught."

"The reason it's hard for me, very hard for me, is that I'm wrong. I caused the problem. I don't know how to correct it," Sterling said.

The racist comments, which have been verified to be said by Sterling, affect a league that is predominantly African-American.

On Sunday, Miami Heat star LeBron James said that he and most players don't want Donald Sterling or his estranged wife, Shelly, to remain team owners.

"As players, we want what's right and we don't feel like no one in his family should be able to own the team," James said.

Shelly Sterling has said that she plans to work to keep her ownership stake and is willing to go to court if necessary.

"I will fight that decision," she told ABC News' Barbara Walters in an interview.

The Sterling firestorm comes in the midst of the Clippers' best chance in nearly a decade at reaching the NBA Finals. Los Angeles is tied 2-2 with the Oklahoma City Thunder in its best-of-seven Western Conference semifinal series. Game 5 is Tuesday in Oklahoma City.

Shelly Sterling Prepared To Fight
In an interview with "Good Morning America's" Barbara Walters, Shelly Sterling stated that if the NBA attempted to oust her from ownership of the Clippers, she would fight the decision.

Sterling On New Tape: 'I'm Not A Racist'
Donald Sterling talks about whether he thinks he's a racist on a new recording released by Radar Online.