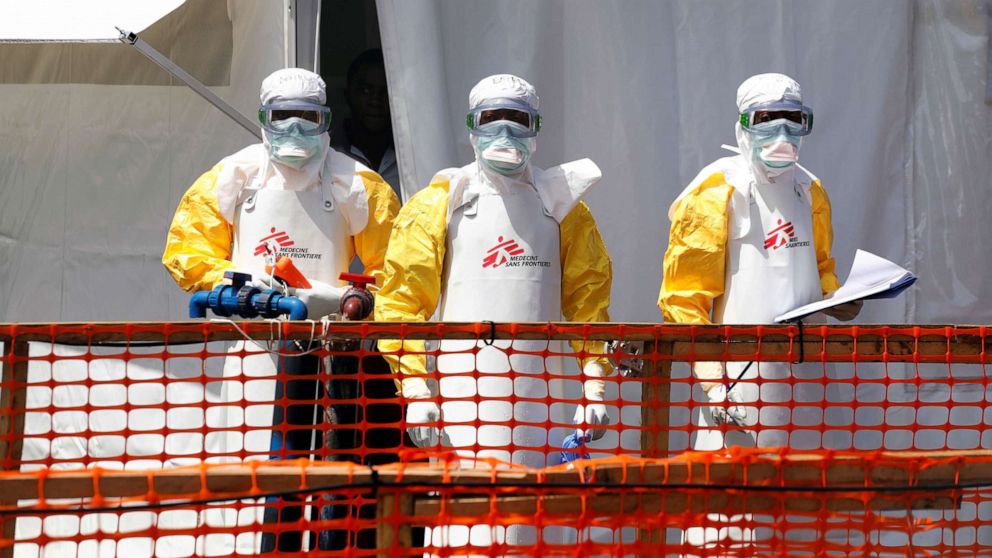 ABCNews
By MORGAN WINSOR
LONDON -- Two of four experimental treatments being tested in the world's second-largest Ebola outbreak will now be offered to all patients after showing promise in saving lives, scientists and health officials announced Monday.

Preliminary findings from a randomized controlled trial that began last November in four Ebola treatment centers in the eastern Democratic Republic of the Congo indicated that patients receiving either of two therapies, known as REGN-EB3 and mAb114, had a greater chance of survival compared to those receiving two other drugs, known as ZMapp and remdesivir, according to Dr. Anthony Fauci of the U.S. National Institute of Allergy and Infectious Diseases, which is co-sponsoring the clinical study.

After a meeting on Friday to review the initial results, an independent monitoring board recommended all future patients be offered either REGN-EB3 and mAb114, while the other two treatments be stopped.

"It means we do have now what looks like [two] treatments for a disease which, not too long ago, we really had no therapeutic approach at all," Fauci told reporters during a telephone briefing Monday, stressing that more research needs to be done.

Both drugs, which were developed using antibodies from Ebola survivors, proved particularly successful in the early days of infection. Among the patients admitted with low levels of the Ebola virus detected in their blood, researchers found 94% on REGN-EB3 and 89% on mAb114 survived. By contrast, 76% on ZMapp and 67% on remdesivir survived.

"From now on, we will no longer say that Ebola is incurable," said Dr. Jean-Jacques Muyembe, director general of the Democratic Republic of the Congo's National Institute for Biomedical Research, the study's other co-sponsor.

The trial is being carried out by an international research consortium coordinated by the World Health Organization (WHO), the global health arm of the United Nations, which last month declared the current outbreak a global health emergency.

"Getting people into care more quickly is absolutely vital," Dr. Michael Ryan, executive director of the WHO's health emergencies program, said during Monday's telephone briefing. "The fact that we have very clear evidence now on the effectiveness of the drugs, we need to get that message out to communities."

This is the 10th outbreak of the disease in the Democratic Republic of the Congo and the most severe in the country since 1976, when scientists identified the deadly virus near the Ebola River.

The WHO's director-general has described the current outbreak as more complex than the deadlier 2014-2016 outbreak in multiple West African countries due to the region's political instability, attacks on health workers, a highly mobile population and community mistrust and misinformation. It's the first Ebola outbreak in an active war zone.

According to the latest data released by a technical committee running the Ebola response and reporting directly to the Congolese president, a total of 2,816 people have reported symptoms of hemorrhagic fever in the Democratic Republic of the Congo's northeastern provinces of North Kivu and Ituri since Aug. 1, 2018. Among those cases, some 2,722 have tested positive for Ebola virus disease, which causes an often-fatal type of hemorrhagic fever and is transmitted through contact with blood or secretions from an infected person.

The ongoing outbreak has a case fatality rate of about 67%. There have been 1,888 deaths so far, including 1,794 people who died from confirmed cases of Ebola. The other deaths are from probable cases, according to the committee.

More than 190,000 people have been vaccinated against Ebola in the current outbreak zone in the Democratic Republic of the Congo, using an experimental vaccine developed by American pharmaceutical company Merck that was tested in the West Africa epidemic.
Report a correction or typo
Related topics:
abc newsnational
Copyright © 2020 ABC News Internet Ventures.
More Videos
From CNN Newsource affiliates
TOP STORIES