The plucky underdog story of the season? The Yankees, of course! 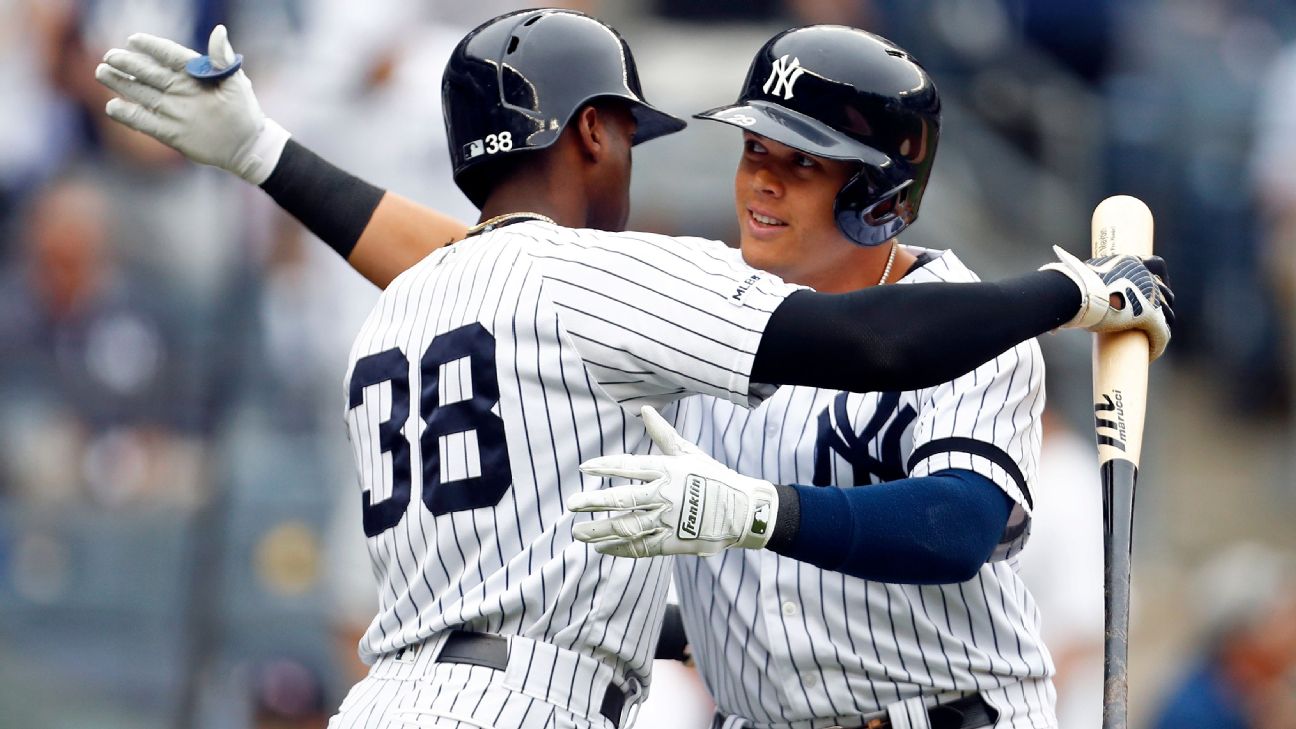 The incredible story of the 2019Yankeeshas been told and retold, because it just keeps happening: A star-laden roster that was projected, before Opening Day, to win as many as 100 games has seen star after star get injured, yet has somehow gotten better.

Injuries hit early and often and to many of the best players. At various points this season, they've set records for most players unavailable at one time, as well as best players unavailable at one time (as measured by previous season's WAR on the injured list). They've spent more money on injured players this year than the Rays have spent on players, by some accounting. When star players have returned from rehab, others have promptly replaced them. That was true in April, in May, in June and in July, and it's true today: This month, they've activated Gary Sanchez and Brett Gardner, while losing Edwin Encarnacion and Aaron Hicks. There are 16 players currently injured, including the first-, second- and third-string first basemen. And the Yankees are on pace to win 107 games.

Undeniably, this has been a triumphant season for the Yankees organization as a whole. That's the plot. What's the theme, though? Is this incredible story one of depth -- a roster Brian Cashman & Co. built before the season that was astoundingly deep and able to win a war of attrition? Or is it one of surprise, of overachievement, of player development -- a roster of nobodies who became heroes when the moment called upon them?

To answer that, let's spin the dial back four months and consider what the Yankees' preseason previews would have looked like if we'd gotten the playing time estimates exactly right.

Here is a list that we'll be referring back to as we go. The first number for each position is Projected WAR followed by Projected WAR, If We'd Known and Actual WAR (prorated):

Projected WAR is what the ZiPS projection system forecast for the Yankees at each position, given the best estimates at the time of Yankees playing time. For example, at left field the Yankees projected to produce 2.6 wins. That was assuming Gardner would play around three-quarters of the time and Giancarlo Stanton would play one-quarter (while spending most of his time at DH).

Projected WAR, If We'd Known is what the projection would have been had ZiPS known with perfect accuracy who would actually play, and how much. (But not knowing how well they'd play; you can't predict baseball.) The If We'd Known projection for left field would include some Gardner -- he has played about a third of the Yankees' games there -- and almost no Stanton. It would also include weighted shares of the projections for Mike Tauchman, Clint Frazier and Cameron Maybin, who have collectively started most of the Yankees' games in left, but who projected to be not great.

So in the case of left field, we get:

Step 1: The Yankees project to be pretty good (2.6 WAR). Step 2: The Yankees get hurt, and project to be worse -- but not too bad (1.8 WAR). They had pretty good depth there. Step 3: The replacements end up being way better than expected, and in fact considerably better than even the original plan (6.2 WAR). The replacements got better as ballplayers, and they overachieved.

There are nine positions on the offensive side. In three of these, the Yankees' projections would have either stayed about the same or gotten better had we known how playing time would really be distributed.

At first base, this is a testament to their depth: They went into the season with two seemingly qualified first basemen fighting for playing time (and, indeed, each homered on Opening Day). When Greg Bird was injured in mid-April, it didn't hurt the collective projection. And with Luke Voit having mostly escaped the carnage this year -- although he's on the IL now with a sports hernia -- the Yankees have been about as good as expected.

At catcher, this is a testament to their depth and the lack of any real surprises. Sanchez has twice gone on the IL, but for short stints, and he'll actually play a little bit more this year than ZiPS had projected. His backup (Austin Romine), meanwhile, is one of the best backups in baseball. Together (and individually), they've done about what would have been expected of them.

At shortstop, this is a testament to overall infield depth. ZiPS didn't think Troy Tulowitzki would be very good but did think he'd play until Didi Gregorius returned midseason from Tommy John surgery. When Tulowitzki was injured a week into the season, Gleyber Torres-- who projected to be much better than Tulowitzki, but as the second baseman -- moved over, actually boosting the shortstop projection (but weakening the second base projection). This was possible because the Yankees had a very qualified major league starter in DJ LeMahieu as a backup infielder; and because they had a second baseman (Torres) who could capably move up the defensive spectrum.

So those are three positions where things went either as expected or where injuries weren't too frequent or too harmful. Everywhere else has been gutted ... and, yet, everywhere else (other than DH) has ended up actually better than the pre-gutting expectations:

At second base, LeMahieu mostly took over in the first half, with Torres having gone to shortstop. LeMahieu, who began the year as a superutility backup, projected to be about three-quarters as good as Torres.

At third base, Gio Urshela mostly took over when Miguel Andujar was hurt on March 31, and then when he was hurt for good on May 12. Urshela, who began the year in Triple-A, projected to be about 40% as good as Andujar.

In center field, Gardner frequently slid over from left field to replace Hicks, who has missed 63 days. Gardner projected to be about half as good as Hicks. More important, when he was playing center field, the Yankees had to backfill left field.

In left field, the aforementioned combo of Frazier, Maybin and Tauchman took over for Gardner. Tauchman and Frazier both had fairly strong projections, at least relative to Gardner, and the trio collectively projected to be about 90%as good as Gardner.

The drop-off was larger in right field, where Frazier, Maybin and Tauchman also filled in for Aaron Judge, who missed 62 days. The trio collectively projected to be about one-third as valuable as Judge.

And at DH, they neither had a great replacement for Stanton nor had anybody (including trade acquisition Encarnacion, who was injured early this month) overperform.

One could applaud the Yankees for their depth: LeMahieu and Frazier would have slotted in as starters on many teams' rosters this spring, and Tauchman's projections suggested he could have, too. The Yankees could have been caught completely flat-footed at four positions -- center field, right field, third base and second base -- but they had credible (if seemingly inferior) replacements at three of them. That's pretty good depth.

At the same time, Urshela and Maybin were more desperation plays -- Maybin having been "purchased" in April from Cleveland, Urshela a seeming afterthought who had been "purchased" last summer. You wouldn't have called either one of them depth, knowing what you knew at the time. Every team has random names ready to replicate replacement level, or whom they pick up for almost nothing when everybody gets hurt.

But the names we just put in bold -- the primary replacements -- share something in common: They've all performed far, far better than expected. Pretty much every player who had to take on a bigger role because of injuries has outperformed expectations:

Torres, who was pushed into a bigger role by Tulowitzki's injury, also outperformed his projections. Frazier outhit his, although he also got injured, his defense wasn't very good and he has since spent about half the season in Triple-A.

The pitching staff hasn't been so blessed. Their pitchers have collectively underperformed preseason projections, even accounting for injuries:

But their dominant bullpen has been both mostly healthy -- with the exception of Dellin Betances-- and fantastic, with the most relief WAR in baseball. As a pitching staff they have the highest "clutch" score in the AL, which for team pitching mostly reflects the ability to successfully leverage the best pitchers in the biggest situations (and to pitch well in those situations).

So to add it all up: Had we known before the season exactly how much playing time the Yankees would distribute to the Urshelas and Tauchmans and Mike Fords and Thairo Estradas and the rest, ZiPS would have projected the Yankees to win somewhere around 84 games -- around where the A's, the Rays and the Twins were before the season. The Yankees' front office built a team that, even with $60 million to $80 million of talent on the IL, projected to be a competitive team in the American League. If you told almost any other team in baseball that a dozen high-impact players would miss a couple thousand games, they would probably conclude they had no chance; they might conclude they were better off using the season to rebuild. The Yankees, though, were still, even on paper, contenders. What an incredible roster.

But ultimately, the bigger story is less the depth than the projection-busting performances. The Yankees will outperform their "true" projection by 15 to 20 games this year. That's incredible. Only the Twins will compare for unexpectedness.

There have been a lot of great Yankees teams in our lifetimes. There's sometimes a tendency to think about great Yankees teams as "because they're so rich" or "because they're so smart." The homegrown 1990s Yankees get more credit for smart, and the purchased early-2000s Yankees are dismissed a bit as just rich. If these Yankees were able to withstand injuries without wavering merely because of depth -- if they'd signed every player in baseball, as that old Onion article proposed -- then maybe we'd talk about the advantage of playing in a big market.

What actually happened is more like what we typically file under "because they're smart." They identified players who were about to dramatically outperform expectations, perhaps, or they developed new skills, swings and approaches to help those players dramatically outperform expectations, or they set up a culture and environment where players would flourish. Of course, that's because they're rich, too: Few teams have bigger staffs, a larger analytics department and more tools to help their players (along with $24 million to spend on a seemingly redundant infielder like LeMahieu).

But none of this happens by accident. As Ben Lindbergh and Travis Sawchik write in "The MVP Machine":

Some of the early practitioners of progressive development were also the teams with the greatest resources, including MLB's bicoastal behemoths, the Yankees and Dodgers.

In other words: It's a lot easier to be smart when you're rich. If you resent the Yankees for their constant financial advantage over your favorite team, by all means, indulge that. But ultimately, this Yankees story really is what you thought it was: A bunch of second-stringers, some pretty good, some just OK, some barely hanging on in the sport, got their chance to save the most first-string franchise in baseball -- and they did it! They made themselves better, and they became heroes. Really, what could be a cooler story than that? 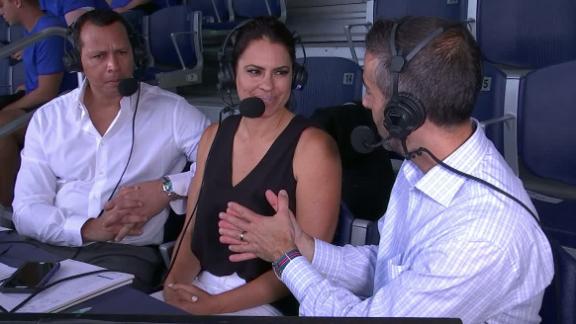